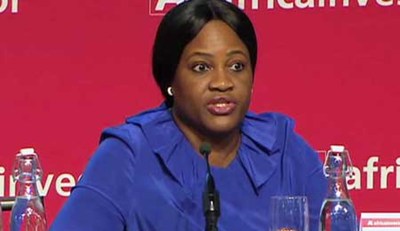 BALTIMORE, MD (AFRICAN EXAMINER) – The Director General of the National Pension Commission (PENCOM) Chinelo Anohu-Amaz has been accused of running the commission like a personal property even as many senior staffs want the president to remove her from office.

The crisis, which has lingered for some time, is now worsening as senior management staff of the organization are no longer comfortable with the leadership of Chinelo Anohu-Amazu, who they claim has broken every rule in the book since she assumed office as Director-General of the organization.

Findings at the Commission’s headquarters in Abuja have revealed that besides allegations of conflict of interest and sundry abuses, Pencom insiders are particularly miffed at Director-General’s continued use of contacts in high places to run rough shod over everyone and every principle of neutral and effective pension administration as a regulator.

They are baffled that this could be going on under the present administration.

It would be recalled that Mrs Anohu assumed headship of the organization in very controversial circumstances, having used her contacts in the Presidency to pressure the National Assembly to reduce the statutory 20 years experience for headship of PENCOM to 15 years in order to accommodate her. Industry watchers and lawmakers were scandalized by the open arm-twisting but were handicapped by the powerful pressure her backers brought to bear on the situation.

Very senior management staff who spoke during the week on condition of anonymity said that the current state of affairs confirmed their initial fears that Anohu`s mode of entry into office was bound to impact negatively on the reputation, performance and credibility of the organization.

Like most major industry stakeholders, they are outraged that she could still be carrying on in her usual style, nearly one year after the inauguration of a government that is avowedly fighting corruption and abuse of office.

They fear that the longer she stays as head of the Commission, the greater the chance of the Federal Government losing everything it has worked for in aid of effective pension administration in the country.

Five directorate staff were particularly concerned that they may all soon lose their jobs, and be termed accomplices in the DG`s acts of arbitrariness, disregard for laid down procedure and penchant for acting solo on sore matters of policy.

They cited many petitions, letters of protest and industry reports that could get all of them into trouble for what are essentially the actions and activities of one person.

According to the directorate staff, one of the latest of such recent petitions, termed “unlawful Activities of the National Pension Commission” to President Buhari detailing some really shocking things under their watch, could get everyone into trouble.

The petition in question was said to have drawn the attention of Mr. President to the commission’s routine disregard for court orders and lack of transparency in the management of a particular pension administrator which it purported to take over but has neither called any annual general meeting nor published any audited accounts, filed any annual returns with the Corporate Affairs Commission(CAC), nor paid any dividends to its shareholders.

Also,  in defiance of a court order restraining Anohu from removing some directors and appointing an Interim Management, she did just that. This action was in spite of a letter from the Attorney-General of the Federation directing PENCOM to obey the court order.

Indeed, PENCOM staffers, particularly senior management staff, some former board members and industry stakeholders, are afraid that details of several arbitrary and irresponsible actions of the DG, in her bid to push the funds underthis particular pension fund administrator into the custody of another PFA owned and managed by her family may soon become public knowledge.

Investigations have shown that the mood at PENCOM now is that the Federal Government should not allow the DG`s personal interests to put everyone else, including hapless pensioners, into trouble; as PENCOM staff are not shareholder in the firm being currently managed by her brother who took over after her mother.