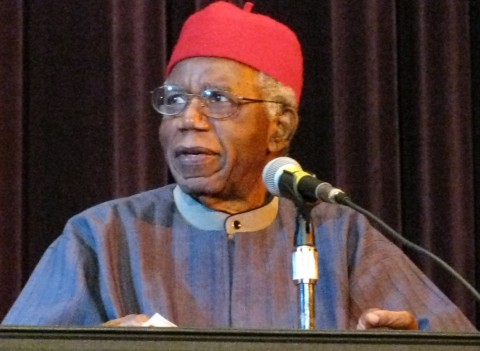 (AFRICAN EXAMINER) – Physically challenged people operating under the umbrella of Initiative for Eradication of Poverty and Empowerment of the Disabled (IFEPED) in Southeast geo political zone of Nigeria, says they have concluded arrangements to immortalize Late Literally Icon, and Author of the popular ‘Things Fall Apart’ novel, Professor Chinua Achibe.

The association’s president, Mr. Ugwu Victor Clifford, who made this known to newsmen weekend in Enugu, said that they would equally organize literally competition as part of plans to immortalize the late literally giant.

Ugwu, expressed appreciation to a prominent medical Doctor in Enugu state and philanthropists, Dr Walter Madike for his support to the association and appealed to other members of the public to assist the association to enable them actualize their empowerment plans for the disabled.

He disclosed that IFEPED has plans to distribute wheel chairs, Electronic Guide Canes, among others for physically challenged people in the South East.

Apart from Achebe, he hinted that IFEPED would also immortalize a former president of the association in Orlu, Imo State, Mr Chimezie Nwizu  who according to him, died in  active service.

Ugwu further revealed that the late president of the association in Orlu, Imo State championed the course of people living with disabilities while he was alive, adding that he would be immortalize with Mr Chimezie Nwizu Competition.

“Immobilization is the process of renaming someone or something thereby given a new life and that will continue from generation to generations. “When IFEPED immortalizes Chinua Achebe with Chinua Achebe Literally Writers, it will cover anyone that wants to write, publish and market a book, All the people with such plans will be registered and become members for the purpose of assisting one another”.

He, therefore, advised Physically challenged people to participate in the competitions which will take place on September 7, assuring them that winners would receive awards including scholarships to study in some institutions or to acquire skills in different areas for empowerment.

“Again, Chimezie Nwizu competition, it will cover every contest, both in sports and academics, Interested groups and individuals will be contesting against each other from time to time either annually or periodically to win a gift or award under IFEPED” he stated.