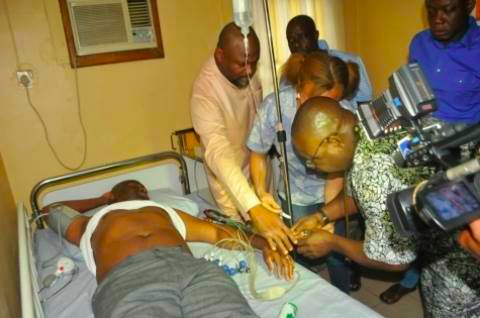 The Police on Sunday morning fired rubber bullets and teargas at Senator Magnus Abe, the Senator representing Rivers South East zone and Chairman of the Senate Committee on Petroleum (Downstream), and Chief Tony Okocha, the Chief of Staff to Governor Chibuike Rotimi Amaechi. 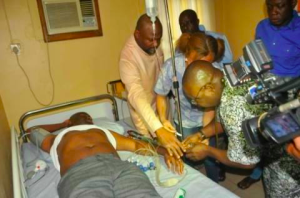 The bullets reportedly killed five children, according to a release by Chief Eze Chukwuemeka Eze, SSA Media and Public Affairs to the Interim State Chairman, APC Rivers State, and also brought the Senator to a state of coma.

The shooting, according to Chukwuemeka Eze, was carried out by a team of regular police and Mobile policemen from MOPOL 19 on the orders of the controversial Police Commissioner, CP Mbu.

“Acting on CP Mbu’s orders, the trigger-happy policemen had stormed the APC rally organised by the Save Rivers Movement at the College of Arts and Science, Rumuola, Port Harcourt, and started shooting rubber bullets and teargas canisters to disperse the crowd.

“One of the rubber bullets hit Senator Abe, who fell to the ground and would have died instantly if his aides had not quickly grabbed him and rushed him to a hospital in D/Line in Port Harcourt. It is reported that the case of the Senator is very critical and arrangement is being made by Governor Amaechi to fly him out for medical attention if he recovers from coma.

“Chief Okocha’s case is a bit better as he was only shot on his legs and may be crippled for life if urgent attention is not given to him.

But the Police have denied shooting at the rally by Save Rivers Movement where Senator Abe was shot.

Police spokesman, Ahmad Muhammad, a Deputy Superintendent of Police, (DSP), said, “I can confirm to you that Sen. Magnus Abe was not shot. The Police did not expend any single bullet while dispersing the crowd.

“It is not true. The police did not shoot the senator, we only used minimum force to disperse the crowd at the venue of the rally,’’ he said.

However, the Rivers State Commissioner for information and Communications, Mrs Ibim Semenitari, said the bullet was meant to kill the State Governor, Rt Hon. Chibuike Amaechi.

In a statement issued in Port Harcourt on Sunday,  Mrs Semenitari said, “The Rivers State government has it on good authority that Senator Abe took the bullet originally meant for Governor Chibuike Amaechi who was billed to be present at the event.

“This is disconcerting especially in the light of recent revelations that the presidency may be training snipers ahead of the 2015 elections and that Governor Amaechi is top on the list of those to be eliminated.

“The Rivers State Government wishes to request the Federal Government and its agencies to respect the rules of democratic engagement in their misguided fight against the people of Rivers State and especially save our nation from the unnecessary chaos into which federal agents like Mbu want to plunge it ahead of the 2015 elections.”

She condemned the disruption of the Save Rivers Movement rally especially since the disruption is selective seeing that the police do not only allow members of the PDP Grass root Democratic Initiative (GDI) to hold rallies but indeed provides them with protection.

The Commissioner pleaded with the Inspector General of Police, the Chairman Police Service commission, the Chairman Nigeria Human Rights Commission “and Mr. President on whose table the buck ends as Commander in Chief and the Nation’s Number One citizen to call Mr. Mbu to order and bring an end to this impunity in Rivers State, and restore the hope of Rivers people that they have not been marked as enemies and lamb for slaughter in their own country.”