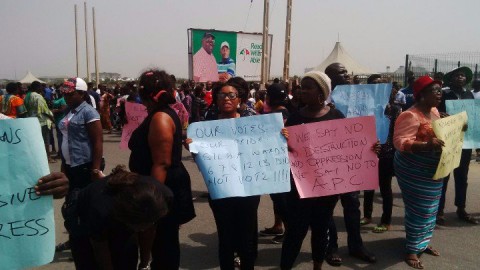 BALTIMORE, MD (AFRICAN EXAMINER) Ahead of the announcement of the Bayelsa state governorship election final result, the state police Command has banned all manner of procession, rallies or demonstration in the area.

The ban order was contained in a statement signed by the Deputy Inspector General of police DIG, in charge of the election, Hashimu Argungu.

According to the statement which was made available to AFRICAN EXAMINER in Yenegoa monday, said “information at our disposal revealed that some disgruntled elements are planing to carry out illegal demonstrations, processions and rallies.

It stated that “this form of conduct will jeopardise the ongoing electoral process.

“Therefore, the command warns the intending perpetrators to desist from such act, as it will dead decisively with any person or group of persons who wishes to engage in any conduct that will compromise the existing peaceful atmosphere”

The statement added “Members of the public are advised to go about their normal businesses, as security agencies are poised to guarantee the safety of lives and property.”