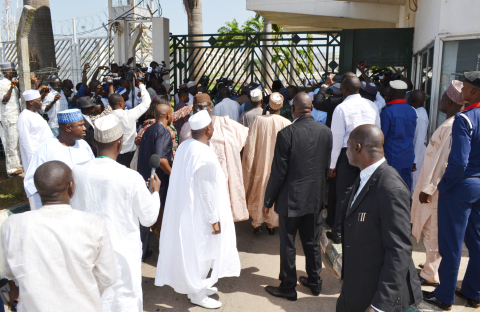 The President and his men have their handwriting all over the invasion of the National Assembly, the Leader of the All Progressive Party (APC), Bola Tinubu has said.

The former Governor of Lagos State said in a statement he made available to news men that “no Commissioner of Police will ever embark on such an action without the clearance of the Inspector General of Police and no IGP will order his men out here without approval by the Presidency. Nigerians know where the buck stops”. 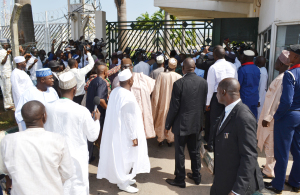 He asked the Jonathan Presidency to take full responsibility for the attack on the leadership of the National Assembly.

“This government cannot claim to be unaware of what the Police would do. This gangster’s antic occurred almost at their doorstep. The Jonathan presidency can no longer   play ignorant regarding the noxious things done for partisan ends”, he said.

Tinubu said “by deploying hundreds of police officers to prevent the Speaker of the House of Representatives from entering the National Assembly Complex, the President has revealed his hand to be a devious one.

“Having asked the Speaker to convene the House to consider extending the state of emergency in Adamawa, Borno and Yobe states, the Jonathan government then deployed the nation’s police to stop the fourth ranking citizen of the nation from entering his place of work.

“Despite the removal of the police officers and security team around him, he still proceeded – at great personal risk – to answer the call of duty. He took the risk, believing his personal situation was a secondary thing when the fate of the nation comes into question”.