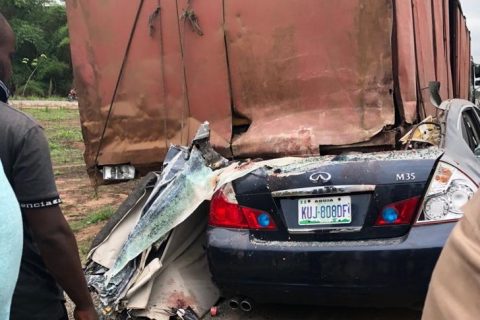 (AFRICAN EXAMINER) – Nigeria’s premier league side, Rangers Inter. FC of Enugu was on Sunday thrown into mourning, following the news of the death of its top striker, Ifeanyi George, who died in ghastly auto crash, along the Benin Agbor road in the early our of Sunday.

The late George, and some of his colleagues were said to be traveling to Lagos when the unfortunate incident occurred.

A statement issued by Rangers media and communication officer, Mr. Nobert Okolie made available to African Examiner Sports read thus:  “the management of Rangers International F.C sadly reports the involvement of some of our players in a fatal accident while traveling for the ten-days break given few days back.

“According to information available to the management, our attacking sensation, Ifeanyi George who was in his vehicle driven by his friend including a B team player, had the vehicle smashed into a parked articulated vehicle along Onitsha-Agbor-Benin road, Sunday morning.

Okolie quoted General Manager of the side, Prince Davidson Owumi as saying,

“We just heard this disturbing news this morning and what we hear is not palatable. I await information from my officials that are already on their way to the spot where the accident was said to have taken place. We call for prayers in this hour of pains.

It would be recalled that rangers  management, had  on Friday, March 20, 2020, approved a ten-day break for the team because of the suspension of all football activities by the nation’s football governing body,  the Nigeria football federation NFF.