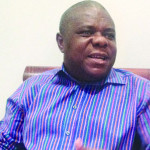 Thursday, August 29, 2013, the likable and unassuming Rt Hon Austin Adiele Opara, who was Deputy Speaker of the House of Representatives between 2003 and 2007, will clock 50.  Evidently, in one’s life golden jubilee anniversary is a particularly significant milestone and symbolic in many respects. At 50, one is incontrovertibly launched into a new phase of life that fast-forwards one into becoming sagaciously matured and perhaps ultimately an elder statesman. These realities make the golden jubilee anniversary worth celebrating , affording a veritable landmark for Hon Opara,  his family members, friends, political associates and well wishers to reflect deeply on his journey in the past 50 years and the future roadmap.

Born in 1963 into the family of Chief Robert and Mrs. Sarah Opara in Nkpolu Oroworukwo, the heart of Portharcourt Austin Adiele Opara had a humble beginning. His father who died two years ago at the age of 110 was a civil servant working in Nigerian Railways Corporation and a church leader of Anglican Dominion. As an astute disciplinarian he brought his children up in a modest, moderate, stumpy and religious mode. Hon Opara consciously and unconsciously relives these attributes in his relationship with people till day.

Opara’s rise in both private and public spheres of life has been meteoric. This is no doubt occasioned by his medley of inviting attributes of humility, hard work, drive and intelligence. After graduating from Rivers State University of Science and Technology and completed his national youth service, he worked with Hericon Dredging, an oil service company where he rose after a few years to be become the purchasing manager. He later bagged a Masters degree in Business Administration from the same University.

Determined to pursue and actualize his entrepreneurial temperament, he pulled out from the oil service company after about five-year stint and set up an oil downstream business and turned out to become a major dealer for Mobil Petroleum Unlimited.  The business towered successfully until in 1998, following the rebirth of democratic politics, he decided to branch into politics, pinching tent with the People’s Democratic Party (PDP). The following year, 1999 at the young age of 35, he won the National Assembly election and thus represented Portharcourt 2 in the House of Representatives between 1999 and 2003.

Opara, in no small way, distinguished himself during the first four years of the Fourth Republic House. Apart from making robust contributions on the floor of the House, he sponsored and co-sponsored several major bills. Among his many bills was Gas Re-injection Bill which sought end to gas flaring and proper utilization of gas resources towards ensuring clean environment and enhanced government revenue. He was also deeply involved in the horse-trading and intriguing politics that gave rise to the passage of Niger Delta Development Commission Bill and its establishment in 2000.

Perhaps, it was on account of this remarkable performance that when he was re-elected in 2003 his colleagues rallied around and returned him unopposed as Deputy Speaker. For the four years he served as Deputy Speaker he was chairman, House Committee of the Whole;  chairman, House Constitution Review Committee, member, ECOWAS Parliament and Governing Council of the International Parliamentary  Union.

As Deputy Speaker Opara exhibited immeasurable degree of candour, liberal disposition, panache, loyalty and humility and thus became a stabilizing force of the House. The result was that the House under the leadership of Aminu Bello Masari and his himself was cohesive and closely-knit with striking harmonious relationship. This impacted positively on the volume of committee tasks, and quality and quantity of bills passed.

Opara demonstrated his patriotic zeal when in March 8, 2005 he moved a populist motion on the floor of the House seeking a unilateral moratorium on the country’s servicing and repayment of foreign debt. The House passed the motion that urged the executive arm to stop repayment and servicing of foreign debts until the creditor nations acceded to Nigeria’s request for debt forgiveness.

He took the debt relief and cancellation campaign to the International Parliamentary Union conference in Manila, Philippines in April, 2005. He canvassed that the parliaments of the creditor nations should exert pressure on their executive arm to put in place a debt relief programme for Nigeria and Africa, arguing that huge debt profile was a threat to democracy in Africa. His presentation was greeted with resounding applause. These efforts aided the success President Obasanjo recorded in attracting debt relief to Nigeria.

His leadership dexterity was further demonstrated when the third term debate threatened to consume the House in June 2006. He moved a historic motion seeking a single six-year for the President and the Governors which brought compromise among members and enabled the House to move forward. Since 2007 he ended his tenure as Deputy Speaker, he has been into flourishing business ventures, while contributing immensely to the consolidation of PDP in his Rivers state. Accordingly, he is in the forefront of the current political battle against Governor Rotimi Amaechi towards ensuring the re-building of the party in the state, ahead of 2015.

At 50, Austin Adiele Opara who is married to Justice Margaret Opara with five children still has many more fruitful years to serve his fatherland. As observed by one of his political associates; with his towering political experience and capacity to deliver, he has a future laced with veritable promises.