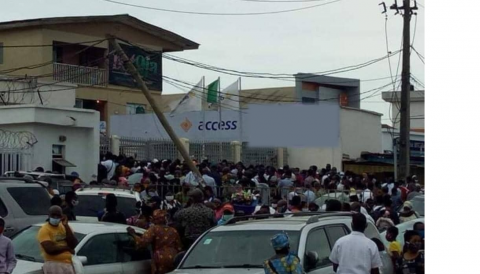 (AFRICAN EXAMINER) – As the gradual and phased relaxation of the lockdown take full effect Monday, Lagos state, the commercial center of Nigeria, witnessed a large turnout of people.

AFRICAN EXAMINER observed that the economic activities Monday morning started on a low scale at different bus stops in the metropolis, but as time passed by, the number of commuters surged, as well as vehicle plying the roads.

Our reporter observed that most of those people who came out complied with the directive on the use of nose mask. While few used the disposable surgical type, a whole lot, used the locally made one, sewn with different local fabrics.

Recall that the state government recently launched the #MaskUpLagos campaign to sensitise the residents on the need to wear face masks while in public places; as well as observe social distancing and practice good hygiene as part of collective efforts to check the spread of the raging virus.

Many office workers and artisans were observed making it to their places of works and workshops.

In line with Governor Babajide Sanwo-Olu’s order last week, some of the commercial bus drivers were seen carrying below the full load capacity but hike the fares.

However, in most places, including the business /offices premises, bus stops; shopping malls; artisans’ workshops, so many people did not comply fully with the social distancing order.

Another call for concern in the Lagos metropolis on Monday were activities in most of the commercial banks. Just like it happened when the total lockdown started and while it lasted, some of the Banks shut out the customers, far ahead of the 3pm – the closing time announced by the State Government.

In Ikeja, a business executive who craved anonymity lamented that he sent his secretary to one of the old generation banks in the State’s capital and despite spending hours outside with other customers, he could not make withdrawal and transact other business he assigned his aide inside the Bank.

He alleged that his Secretary told him that many customers left the bank premises in frustration, when there was nobody to attend to them.

With the experience on Monday, it is hoped that more Lagosians will troop out for their economic activities as the week unfolds.

In his speech during Monday’s briefing of the Presidential Taskforce (PTF) on COVID-19 in Nigeria, Dr Chikwe Ihekweazu, Director General of Nigeria Centre for Disease Control (NCDC) warned that as a result of the poor compliance to the use of face masks and physical distancing  directive on Monday, especially in banking houses, the country would record a few more infections.