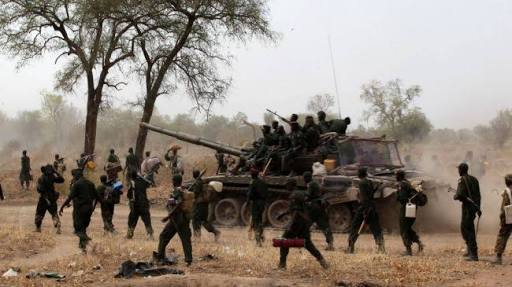 The skirmishes started when the supporters of the two leaders began to shoot one another in Juba city, the South Sudan capital.

Sources in the capital confirmed gunfire and large explosions all over the city. Heavy artillery had also been confirmed to be deployed.

Over 200 victims including peacekeepers have been reportedly killed in the renewed clashes which broke since last Friday.

Several other peacekeepers have been injured, as well as many civilians who were caught in crossfire.

The raging violence erupted hours after the UN Security Council called on the warring factions to immediately stop the fighting.

Consequently, it condemned the clashes “in the strongest terms” as well as expressed shock on the attacks on its sites. However, the Council called for additional peacekeepers to be sent to the troubled country

In the same vein, the US State department in a statement it issued on Sunday said it strongly condemned the latest outbreak of fighting in Juba.
The State department’s Spokesman John Kirby said Washington had ordered the departure of non-emergency personnel from the US embassy in Juba.

Meanwhile, a US based academic who studied in Sudan, Mr. Eric Reeves, alleged that the VP was trying to orchestrate a coup against the President with the backing of President Omar Bashir of Sudan.