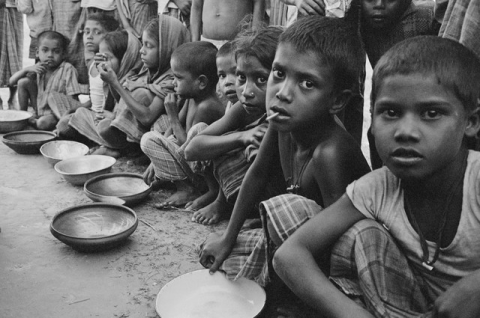 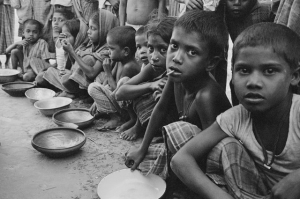 The number of people living in extreme poverty around the world has sharply declined over the past three decades, but it still includes roughly 400 million children, or one -third of those living in such abysmal conditions, according a new World Bank analysis released today that for the first time gives an in-depth profile of the poorest people in the world..
The report found that 721 million fewer people lived in extreme poverty in 2010 – defined as under $1.25 a day – compared to 1981. But it also concluded that a disproportionate number of children were among them: Children accounted for one in three of those living in extreme poverty around the world in 2010, compared with only one in five of those living above the poverty line. In low-income countries, the percentages were even worse, with half of all children living in extreme poverty.
“We have witnessed an historic movement of people lifting themselves out of poverty over the past three decades, but the number of children living in poverty alone should leave no doubt that there remains much work to do,” said World Bank Group President Jim Yong Kim. “We can reach our goals of ending poverty and boosting shared prosperity, including sharing that prosperity with future generations, but only if we work together with new urgency. Children should not be cruelly condemned to a life without hope, without good education, and without access to quality health care. We must do better for them.”
“The finding that over 400 million children live in extreme poverty and children are more likely to be poor than adults is disturbing, since this can exacerbate child labor and create inter-generational poverty traps,” said Kaushik Basu, World Bank Chief Economist and Sr. Vice President, “Hence, if we want to make a sustainable dent on global poverty, this is where we need to focus our attention.”
Six months ago, the Governors of the World Bank Group endorsed two global goals: ending extreme poverty by 2030 and promoting shared prosperity by fostering income growth of the bottom 40 percent of the population in developing countries. Poverty reduction globally has moved at a faster pace than expected; the Millennium Development Goal of halving extreme poverty between 1990 and 2015 was reached five years ahead of time.
But the World Bank’s analysis released today underscored the difficulty of reaching the goal to end poverty by 2030, finding that while the reduction in poverty moved significantly in middle-income countries such as China and India, low-income countries showed much slower progress.
While extreme poverty rates have declined in all regions, the world’s 35 low-income countries – 26 of which are in Africa — registered 100 million more extremely poor people today than three decades ago. In 2010, 33 percent of the extreme poor lived in low-income countries, compared to 13 percent in 1981.
The depth of poverty
The analysts also found that the poor in 2010 were as bad off as they were in 1981, with the exception of India and China. The “average” poor person in a low-income country lived on 78 cents a day in 2010, compared to 74 cents a day in 1981. But in India, the average income of the poor rose to 96 cents in 2010, compared to 84 cents in 1981, while China’s average poor’s income rose to 95 cents, compared to 67 cents.
The report also calculated that the amount of money needed every year to lift more than a billion people out of extreme poverty would be $169 billion in 2005 dollars. This was less than half than in 1981.
Focus on Rural Areas, Agriculture and Access to Basic Services
The Bank report also provided previously unreleased details about where the world’s poor live and work, as well as their access to basic services. The analysis found that more than three quarters, or 78 percent, of those living in extreme poverty lived in rural areas, with nearly two thirds of the extreme poor deriving their livelihoods from agriculture.
The extreme poor also continue to lag significantly behind in access to basic services, the analysis found. Only 26 percent of the poor had access to clean water in 2010, compared to 56 percent among those living above the $1.25 poverty line. Meanwhile, fewer than half – 49 percent – of the extreme poor had access to electricity, compared to 87 percent of the non-poor. And while 61 percent of those above the $1.25 poverty line had access to basic sanitation, just 20 percent of the extreme poor had access to similar services, the report showed.
“We need to act urgently, and with a sharpened focus, to implement effective policies in places where poverty remains entrenched, particularly rural areas,” said Jaime Saavedra, World Bank Acting Vice President of Poverty Reduction and Economic Management. “Children living in complete deprivation today are unlikely to benefit much from growth in the future, unless they secure access to adequate nutrition, education, and health services. Accelerating the pace of poverty reduction in low income countries represents a moral imperative. There is no time for complacency.”
World Bank