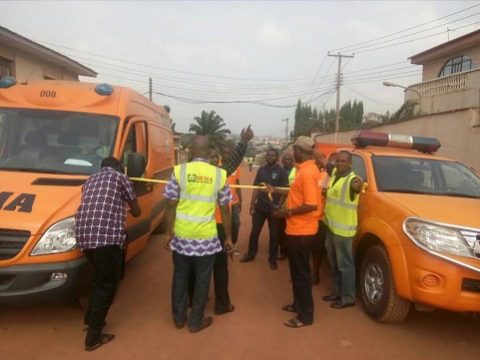 (AFRICAN EXAMINER) – As part of measure to collaborate with the federal Road safety Commission, FRSC and other sister  organizations in decongesting traffics in major roads in South East geo political zone during the Christmas and new year festivities, the National Emergency Management Agency (NEMA) in the area, has deployed its personnel on 24-hour patrol in major roads within the region, with a view to attending to all types of emergencies and rescue missions on the roads.

Speaking Saturday in Enugu during the official flag-off of the 2017 edition of the annual NEMA Operation Eagle-Eye’’ exercise, South- East zonal Coordinator of the Agency, Mr. Brandon Walson, said the exercise was initiated with a view to tackling the issue of heavy traffic jam that is always associated with the  festive period in the zone.

He disclosed that the agency would deploy four teams with four rescue vehicles to critical road corridors in the South-East.

According to the South East NEMA boss, some of  the vehicles to be deployed are, Ambulances; an emergency response Hilux and a Medical Intensive Care Unit (MICU)  vehicle, among others.

Walson, listed some of the roads where NEMA personnel would patrol 24-hour to include, Enugu-Onitsha Road; Enugu-Port Harcourt Road; Enugu-Abakaliki Road and Enugu-Nsukka-Obollo Afor Road.

He said: “we are working closely with the Federal Road Safety Corps (FRSC) in this operation  Eagle-Eye which  is meant and designed to assist the FRSC.

“Through the operation, we share and collate data about movement and development on the roads together with FRSC personnel,’’ stressing that the agency also use the period to sensitize embers of the public on campaign against disasters whether natural or man-made.

pro-active to reduce losses during disasters,’’ he said. Walson equally hinted  that the operation would last for about two weeks; “It will be starting today (Dec. 23) and will end on Jan. 4,

In brief speech, the Enugu state Sector Commander of the  FRSC Sector Commander in Enugu State, Mr Edward Zamber, applauded  the co-operation and synergy between NEMA and FRSC over  these years, calling for its sustainability.

He said with the NEMA Operation Eagle-Eye the major roads within the state and by extension the zone would be more secured, advising motorists to drive with care while embarking on their trips.