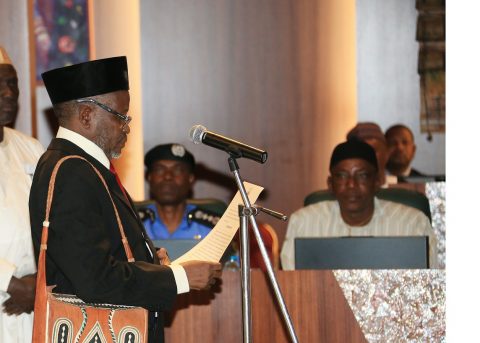 (AFRICAN EXAMINER) – The Senate has finally confirmed the appointment of Justice IbrahimTanko Muhammad as the substantive Chief Justice of Nigeria (CJN).

During the screening, the new CJN answered questions relating to corruption, administration of criminal justice and the poor funding of the judiciary.

He was accompanied to the upper Legislative chamber by top judiciary officers.

The Senate had later Wednesday morning reversed itself on the approach to the screening and confirmation exercise of the Acting Chief Justice of Nigeria (CJN), Justice Ibrahim Tanko Muhammad as the substantitive CJN.

Contrary to the expectation, the upper Legislative Chamber went to an executive session – a closed-door session for the screening.

Earlier, the exercise was included in the Order Paper of the day. This sent the signal that Justice Muhammad would be traditionally screened and confirmed during plenary.

The Senators initially collectively agreed to go into a closed-door session for the screening.

The Wednesday decision contradicted the earlier agreement and announcement Tuesday by the President of the Senate, Dr Ahmed Lawan that the screening and confirmation would be conducted by the committee of the whole.

However, the red Chamber resorted to the earlier decision and continued the screening in open plenary.

Following the recommendation of the Nigeria Judicial Council (NJC) about two weeks ago, President Buhari last week wrote the Senate, seeking the confirmation of Justice Muhammad as the substantive CJN.