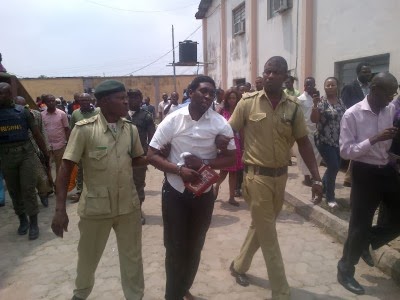 Justice Lateefat Okunu of the Ikeja High Court has sentenced Akolade Arowolo to death by hanging for killing his banker wife, Titilayo Omozeze. 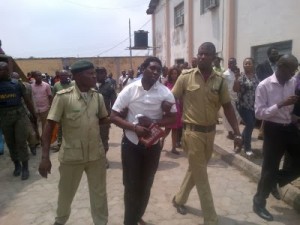 Arowolo was said to have murdered his wife on June 24, 2011 at their residence, No. 8, Akindeinde Street, Isolo, Lagos, while the matter was charged to court. His wife, Titilayo was then a staff of Skye Bank.

The convict had come to the court around 9:30am by prison officials, apparently having a premonition of the fate that will befall him.

Delivering judgment today, Justice Okunu said evidence before the court proved that Arowolo actual murdered his wife in the matrimonial home, while she also based her judgment the forensic report conducted by Professor John Obafunwa. The report had said there was no way the deceased could have stabbed herself to death.

Prof Obafunwa had testified that his autopsy report revealed that Titilayo was killed through 76 knife stab wounds, saying that the knife wounds affected Titilayo’s left eye, right eye, upper chest area, right chest and collar bone, pointing out that the deceased could not have inflicted such wounds on herself.

Justice Okunu stated that by the law principle of ‘Last Seen’ since Arowolo was the only person with his wife when she was stabbed, no one but him could have killed her, adding that evidence proved beyond doubt that Arowolo murdered his wife with tremendous knife stab force and therefore sentenced him to death by hanging.

Arowolo wept and pleaded for mercy from Jesus Christ as he was told his fate.

The Lagos State prosecution team, led by Mrs Olabisi Odugbesan led 15 witnesses in evidence to convince the court that Arowolo murdered his wife. No fewer than 21 witnesses gave evidence in the case that lasted for 26 months.

The Lagos State prosecution team, led by Mrs Olabisi Odugbesan led 15 witnesses in evidence to convince the court that Arowolo murdered his wife.

Arowolo’s lawyer, Olanrewaju Ajanaku had submitted that there were no substantive evidence linking his client to the murder of his wife, noting that since none of the prosecution witnesses, saw the alleged fight between the couple, their testimonies were mere hearsay.