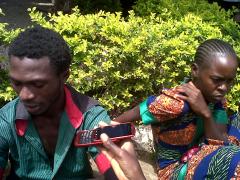 Chris Olakpe, the State’s Commissioner paraded the victims at the Commands headquarters in Jos.

The Police boss said James went in search of job as a school certificate drop-out, lost all hope of getting job, came back home and accused his mother (Jummai) of witchcraft, that she was responsible for his poor state and beat the mother to death.

In an interview, James soberly stated, “the people of the of the community had told me that my mother was a witch and she was responsible for the death of my father and one other woman in the community, so when I couldn’t get the job, I was still told the same thing, which led to my action.”

In another development, the police command also paraded a woman who conspired with her lover to kill her husband.

“Culpable homicide arising from a crime of passion, which occurred in Langtang North Local Government Area of the State, where a woman (Yakbyen) whose husband (Nanbol) was a labourer traveled out to his normal business then the wife called his friend (Nanbol Samson), when he came, then she told the husband’s friend that if they want to continue to be lovers, they have to do away with her husband.” Olakpe explained

Adding further that “when the husband returned from Port Harcourt, the friend came to the house to invite the husband for a chat and with another accomplice, hacked the man (husband) to death”

Olakpe further revealed that, the conspirators have all made useful confessional statements on how the conspiracy to murder was hatched and are facing enquiry by the state CID, saying they will soon be prosecuted to serve as a deterrent to other who cannot control their libido.

The deceased wife (Yakbyen) 25 years old who is also in police custody told newsmen that she never wanted her husband death, but admitted that she was having an affair with her late husband’s friend.

Also Nambol Samson, 28 years old, who conspired to kill the deceased, said he was having and affair with the Yakbyen and also admitted to committing the crime.

The Police Commissioner called on residents to always report suspicious persons in their community to security agents, saying by doing so it helps in the reduction of crime in the society.