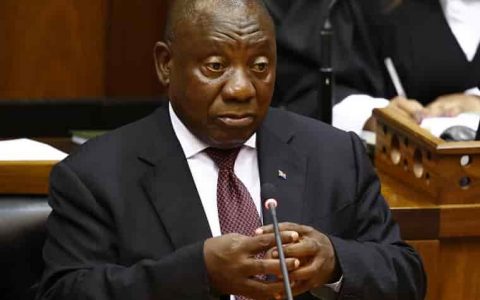 (AFRICAN EXAMINER) – The Government of the Republic of South Africa has said that it is currently re-positioning to become a serious player in the global gas market.

The minister said the government will promote the development of a domestic and regional gas market.

“We continue to advance our Gas to Power projects with the Coega Special Economic Zone (SEZ) identified as the first Liquefied Natural Gas (LNG) import terminal. This lays a foundation for Gas to Power plants and converting existing power plants from Diesel to Gas.

“Present and future gas discoveries in our country should find their way to our power plants and other petrochemical facilities. This will reduce the importation of beneficiated hydrocarbons”, he said

He added that a Technical Working Group that will produce a commercial business plan for the development of the LNG import-export facilities across various ports of the country has been established.

He further noted that the Gas Amendment Bill will be tabled in Parliament, in line with the appropriate legislative process.

The Bill, according to him, aims to, among others, attract infrastructure investment for LNG imports; increase exploration; create domestic gas feedstock; diversify the energy mix and reduce carbon emissions.

“Liquefied Petroleum Gas, or LPG, is an efficient form of energy for cooking, space heating, and water heating. Yet its contribution remains to be below par. Integral to the LPG Expansion Initiative, we have set a target to double LPG consumption over the next five years. Also localise the manufacturing of gas cylinders and appliances”, he added.

“Against this backdrop, the military insurgency in the gas rich part of Mozambique concerns us. A solution to bring about peace and stability in the affected areas must be found urgently.

“To resolve our energy challenges, we should identify opportunities and exploit them. These efforts should lead to ensuring that the poor and marginalised are included in policymaking processes and in the economic growth and development initiatives in the energy sector”, he stressed.

The minister observed that the energy sector is a catalyst for economic growth, hence the prioritisation of the supply of affordable and reliable energy.

He also noted that following the nationwide lockdown, South Africa allowed the petroleum energy sector to operate at full capacity. However, the decreased demand for petroleum products forced some refineries to close.

Further relaxation to lockdown regulations, he added, has led to rapid increase in demand, which resulted in shortages in some energy products, especially petroleum products in some areas.

“Since our last meeting in Cape Town in 2019, we have published the Petroleum Resources Development Bill for public comment. We have had consultations with a broad range of stakeholders.

“Our intention is to have the Bill finalised; to attract investment and ensure synergy between oil and gas activities and our nation’s environment and water resources”, he further explained.

Hon. Mantashe said South Africa needs a new crude oil refinery, adding that the scale of petroleum product imports and the existing capacity in its refineries makes it necessary.

“Through implementation of the Integrated Resource Plan approved in 2019, which is commonly referred to as the IRP 2019, we are exploring ways to reduce high costs and eliminate unreliability of supply.

“The Department of Mineral Resources and Energy, therefore, issued two determinations to enable an additional thirteen thousand megawatts (13 000 MW) into the electricity grid, in the short and medium term”, he stressed.

According to him, the IRP envision a “just transition” from a high to a low carbon emission environment, noting that at the same time, the country aims to diversify electricity generation sources as well as ensure local and regional development.

The minister also pointed out that Gas and Renewables account for a significant portion of the power that will be procured in the short to medium term.

Meanwhile, the goal of AOW Virtual Summit was to reignite the African upstream following a tumultuous year that has feature unprecedented supply and demand shocks in the sector.

The low oil prices at the global market  have resulted in a review of a number of planned upstream and midstream investments in the Oil and Gas sector.

Consequently, a number international oil companies are now announcing lay-offs of a number of workers and in the unconventional oil and gas sector.

“As we seek to restore our economies, we should re-imagine the future, adapt and adjust our programmes to create policy certainty, attract investment and save livelihoods”, he recommended.