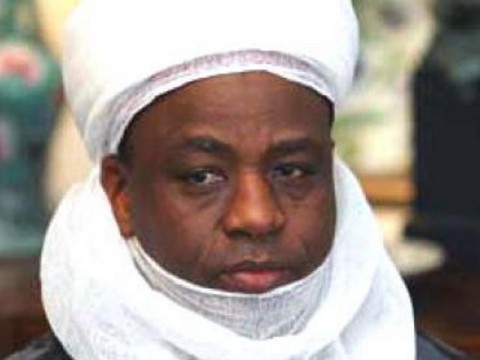 Sultan Abubakar, who is the President General of the Nigeria Supreme Council for Islamic Affairs (NSCIA), also called on President Goodluck Jonathan to reconsider dialogue with the Boko Haram insurgents.

The traditional ruler spoke in Abuja while opening the 7th Annual National Conference organised by the Muslim Lawyers’ Association of Nigeria (MULAN) in Abuja, with the  theme: “Rule of Law and Social Justice: A Panacea for Unity and National Development.”

He insisted that the government could only win the war against insurgency through dialogue, even as he advised the federal government to swap the detained Chibok girls with Muslim detainees who are not connected with the deadly Boko Haram sect.

Alhaji Abubakar also called on Muslim lawyers to offer free legal services to detained Boko Haram suspects so as to ensure freedom for those who are not connected with the deadly sect.

The Sultan said: “I have said it one million and one times, as far as America, when I delivered a lecture at Harvard University, that the problems of Nigeria is not caused by Muslims.

“I want to assure you that we have been doing our best to educate people on what Islam and Muslims stand for and want to do in Nigeria.

“I have said one million times, Muslims in Nigeria are not out to Islamise Nigeria because it is not possible. We all know what is said in the Holy Quran. So why should anybody be afraid of the strength of Muslims in this country?

“When we come together and we are doing positive things or rightly it is got the development of that community and when a community is developed Muslims, non-Muslims and whoever within that community will be a beneficiary of that developments.

“So why can’t we use our population, the strength, the number of Muslims in Nigeria to make positive impact and make positive difference in what we do in this country?”

He insisted that no country could win insurgency war without dialogue.

He added: “Sometimes when we speak as Muslim leaders, somebody will say ‘look, His Eminence should not speak because he is not a politician.’

“We are the fathers of the politicians, we are the leaders, so we must tell them what is right and what is wrong.   If they accept our advice, alhamdudilahi!. If they don’t accept, alhamdudilahi.

“But we will continue telling them until they see reasons why they should listen to us. So, as leaders at all levels, as Muslim leaders, we must keep on telling the government what they are doing rightly or wrongly because we need a society that will meet the challenges of the present day insecurity in our country.

“Because somebody who doesn’t want to say I am speaking to Boko Haram, therefore, somebody will say I am a sympathiser of Boko Haram. No.

“You cannot fight criminals because you don’t even know where they are. About two weeks ago, the American Government exchanged one prisoner who was even a deserter for very senior five al-Qaeda leaders who have been in Guantanamo prison for years.

“They kept dialoguing with them for give years. For them to exchange him they must have been talking.  There need for dialogue. You cannot win any insurgency by way of force. No where in the world that works.

“When somebody tells you that he is not a Boko Haram, please take it that he is not because if he is Boko Haram he will never denounce it. So if you have 100 suspects and one of them says ‘I am not Boko Haram’, please release him. The other 99 will say ‘yes we are, what can you do to us?’

“It is important for us as leaders, especially as Muslims to look at these issues in a broader perspective. Let us not just be opinionated because we must reach out to everybody.”

His Eminence cautioned those trying to plunge the country into another civil war and urged them to desist from such antics.

He said: “It is interesting to hear an eaglet lawyer saying that when the Civil War took place he was not born.

“I am happy to hear that and also to make a statement that it behooves on all of us – those who were not there during the Civil War, those who were there and actually took part directly or indirectly to make sure as Muslims and as Muslim lawyers we do whatever it takes to ensure no Civil War ever takes place in Nigeria again because we know the adverse effects of civil war in any country.”

The Sultan decried the low participation of Muslim lawyers at the event and  wondered whether such adherents were shy of their the Islamic faith.

He said: “Why don’t we come out freely to participate in our activities. Are we shy of being identified as Muslims or are we afraid of being perceived or taken as somebody that poses a threat to the country? Are we shy or afraid or are we just indifferent to issues affecting Muslims in the country.

“In Islam, you all know what it means to be a leader. So, I am challenging you to wake up and do what you are supposed to do. Go round the prisons; there are so many Muslims locked up in prisons as suspects of insurgency.

“Why don’t you take up such issues to the courts? Is saying the truth now a negative thing in a country that hurts? We must say the truth.

“When you challenge people and say something is wrong it does not mean you are fighting somebody. You are saying it so that the authorities will look at it and mend their ways for the betterment of the society.

“Not that somebody will be labeled an extremist or a supporter of this and that or somebody who has a small compassion for a criminal. Of course, we have compassion for criminals because we believe when you are thrown into prison you come out a better person.”

The Sultan insisted that what the Muslims are demanding through the inclusion of Sharia in the Constitution is justice.

He urged Muslim lawyer to desist from politics when discharging their legal duties in court.

In his keynote address, former Nigeria’s Permanent Representative to the United Nations, Professor Ibrahim Gambari, noted the need for good governance, which according to him remains the best way to tackle corruption.

Gambari said: “Governance is about how the cultural habits, political institutions and economic systems of a society can be aligned to deliver the desired life for its people.

“Good governance is when these structures combine in a balance that produces effective and sustainable results in the common interest of its people.

“In Nigeria’s case, we must decisively tackle our most development challenges such as poverty, unemployment, security,  and deplorable state of infrastructure through increased efforts to promote good governance in all ramifications.”

President of the MULAN, Mr. Abdul-Ganiy Bello, urged the Federal Government to reconsider the reports of the Sheikh Ahmed Lemu on Post Election Violence and the Minister for Special Duties, Taminu Turaki, (SAN), Committee on negotiation with Boko Haram for implementation.

Bello said, “It is our view that one of the major factors contributing to the incessant bomb attacks, sporadic killings and abduction of Chibok school girls is government’s failure to implement the reports of the various committees it had set up as well as recommendations by some individuals and organizations.