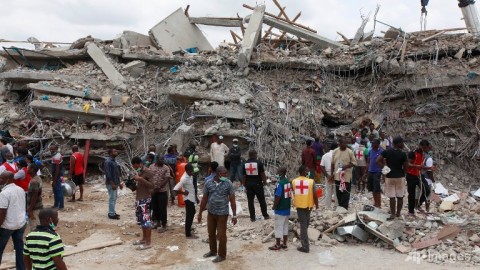 The Coroner’s Inquest into the death of unknown persons in the collapsed building at the Synagogue Church of All Nations at Ikotun area of Lagos, Nigeria commences sitting at the Coroner Court,  High Court Premises, Ikeja from  13 October.

The Lagos State Government had instituted a Coroner’s Inquest under the Lagos State Coroner’s System Law No. 7 of 2007 for the purpose of establishing the cause and manner of the collapsed building incident of Friday, September 12, 2014 at The Synagogue Church of All Nations, Ikotun-Egbe area leading to the death of over 100 people. 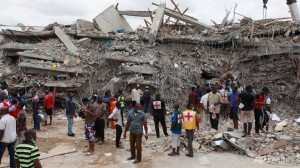 In a statement by the Lagos State Judiciary, some media organisation which includes News Agency of Nigeria, P.M. News, Vanguard, Channels TV, Television Continental, Daily Independent Newspaper, The Nation and Punch Newspaper are expected to present themselves and give evidence at the Inquest.

The Coroner is Magistrate O. A. Komolafe and the expected organisations, bodies and persons are requested to contact the Coroner’s Registrar immediately to schedule their appearance.

The statement called on other members of the public who wish to give evidence or tender any material that will assist the Court in its findings to indicate their interest by contacting the Registrar at the Coroner’s Court, High Court premises, Ikeja, Lagos State between the hours of 8.00a.m. and 4.00p.m. daily.

It should be recalled that the inquest was instigated by the State Attorney General & Commissioner for Justice, Mr. Ade Ipaye, under section 15 of the Coroner Law which provides that a Coroner shall hold an inquest whenever he is informed that the death of a deceased person lying within his Coroner District was as a result of a violent, unnatural or suspicious occurrence.

Ipaye highlighted that the Coroner has extensive powers to investigate the cause and circumstances of death and bring his findings and recommendations to the attention of appropriate authorities.

In doing this, he has all the powers of a magistrate to summon and compel the attendance of witnesses, including medical examiners, and require them to give evidence, produce documents or present other relevant materials’, he added.

He said “The Law requires the verdict of a Coroner as certified in writing to be forwarded to the State Attorney General and such verdict may form the basis of criminal prosecutions depending on the evidence collected.”