There Is Hope For A New Nigeria, Osinbajo Tells Nigerians In Addis Ababa 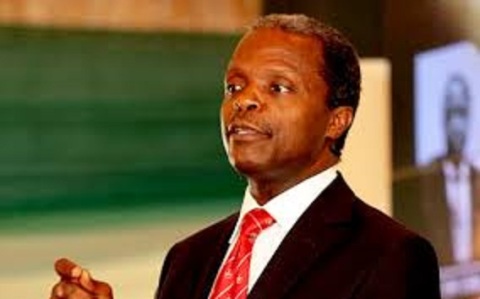 *Spells out how states can avoid salary crisis in the future.

A new Nigeria is happening and it will require the commitment of all Nigerians, according to Vice President, Prof Yemi Osinbajo during an interactive session he held with Nigerians based in Addis Ababa last night.

The Vice President who had just returned to Abuja today after speaking and participating at the 3rd international conference on Financing for Development hosted by the United Nations at the Ethiopian capital had his first meeting with Nigerians abroad after the assumption of office.

At the meeting hosted by the Nigeria’s Envoy to Ethiopia and the African Union, Ambassador Usman Baraya, the Vice President said “there is so much hope and expectations. A new Nigeria is happening, we are going to see a new Nigeria.”

According to him, “the reason why I am so convinced is because everyone of us one way or the other believe that there should be a change. I am not saying those who voted for President Muhammadu Buhari and myself, even if it was the other govt, everyone of us expected some kind of change.”

He noted that Nigerians are committed to the “good of our nation, it is the only place we can call home and there is no reason why it cannot be the best place in the world.”

Continuing Vice President Osinbajo said “the President and I are committed to the good of Nigeria. Our country deserves the very best and does not deserve what it has got for so many years.”

Prof. Osinbajo recalled the level of hope and expectations from Nigerians during the campaign, narrating how people showed that hope even to the then presidential candidate Buhari and himself, including “when poor people were offering us small amounts of money because they believed and expected a better Nigeria. Even in poverty, Nigerians are noble.”

Reiterating the President’s determination to deliver the change promised during the campaigns, VP Osinbajo assured that the new administration will ensure that things are done very well.

Said he: “the ideas are there, we just need to do a good job with implementation, and that is what we shall do.

Asked about the current workers’ salary bail-out by President Muhammadu Buhari, the VP clarified again that the monies from the Excess Crude Account was not used but proceeds in dividends and taxes from the LNG were released for sharing.

Specifically, the Vice President explained the bail-out package approved by President Buhari is a three-pronged relief package that will end the workers plight.

*The sharing of about $2.1B from LNG proceeds, made up of $1.6B in taxes and $500m in dividends. The money is released for the payment of workers salaries, which has been unpaid for several months is many states.

* A Central Bank-packaged special intervention fund that will offer financing to the states, ranging from between N250B to N300B. This would be a soft loan available to states to access for the purposes of paying backlog of salaries.

*A debt relief program designed by the Debt Management Office, DMO, and the CBN which will help states restructure their commercial loans currently put at over N660B, and extend the life span of such loans while reducing their debt-servicing expenditures.

This third option, by extending the commercial loans of the states, would therefore make available more funds to the state governments which otherwise would have been removed at source by the banks. The federal government will sway its financial muscle to guarantee the elongation of the loans for the benefit of the states.

In all of these, the country’s debt profile will not be increased, the VP explained.

Asked how the states would not end up in the future in a similar crisis situation requiring federal government’s intervention again, the Vice President outlined a number of ideas.

First, he said states must do more to increase internally generated revenue, while also urging them to put workers salaries as a first line charge in their expenditure.

Besides, he stated the need for states to clean-up their payrolls to ensure that ghost workers are eliminated.

Another plan he disclosed is to ensure that all state governments will have a vibrant Debt Management Office, DMO, while ensuring a general atmosphere of transparency and accountability in their public expenditures.

During the interaction many of the Nigerians in attendance expressed confidence in the Buhari presidency, noting that the new government  have re-energized and motivated Nigerians to support the President in taking Nigeria to where it belongs.

Among dignitaries at the interaction were the Permanent Secretary in the Ministry of Finance, Mrs. Anastasia Mabi Daniel-Nwaobi, Nigeria’s Envoy to Ethiopia, Ambassador Usman Baraya, Professor Babatunde Osotimehim, the Executive Director of the United Nations Fund for Population Activities, UNFPA, Nigeria’s Deputy Permanent Representative at the United Nations, Ambassador Usman Sarki and Dr. Mansur Muhtar, former Finance Minister among others.