Tragedy: Father, Daughter Die As Their SUV Plunges Into River 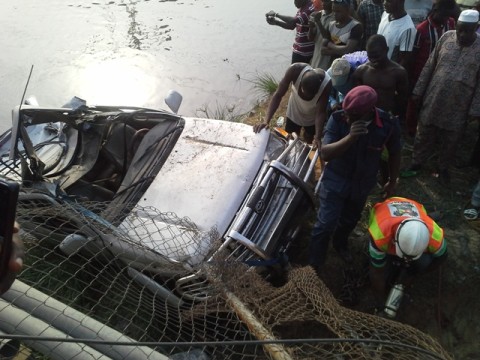 A man and his daughter have died as their SUV plunged into a river on Ikota Bridge, Lagos, Nigeria. 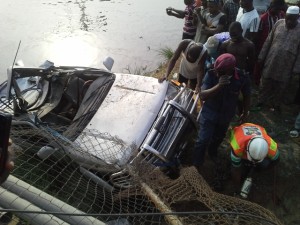 The incident occurred around 1.00 am on Tuesday.

The family of three were identified as Sunday Megba, his wife, Sade Megba and their 11-year old daughter, Lola Megba.

They were driving in their Toyota 4 Runner SUV, grey colour, with the registration number Lagos DN 866 JJJ. They were said to be coming from a Celestial Church in the area and were heading to Ajah when the incident occurred.

The vehicle was said to have somersaulted before plunging into the river, but the man’s wife was lucky as she fell off the vehicle while it was still somersaulting and sustained serious injuries.

Local divers were unable to rescue the man and his daughter alive as their dead bodies were recovered at about 3.00 am.

While Sade was rushed to the Peninsula Hospital for treatment, the deceased where deposited at the Mortuary of the same hospital.

Spokesperson, Lagos State Emergency Management Agency (LASEMA), Dr. Femi Oke-Osanyintolu confirmed the incident, saying that the vehicle fell off the bridge and that the man’s wife was rescued alive.