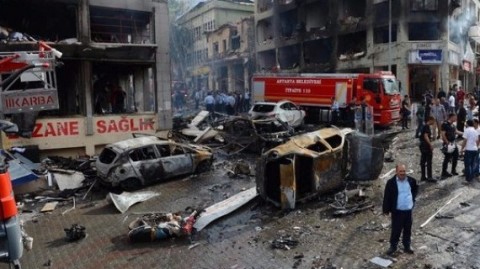 Turkey has named the notorious terrorist group, ISIS as the first suspect that responsible for the deadly bomb attack, last Saturday in Ankara, the country’s capital, which led to the killing of almost 100 people and several others injured.

Turkish Prime Minister (PM) Ahmet Davutoglu Monday said despite that no group has claimed responsibility for the attack; the government believed that two male suicide bombers occasioned the explosions, which was calculated at a peace rally.

However, PM Davutoglu declared “These attacks will not turn Turkey into a Syria”.

In her reaction, German chancellor, Angela Merkel who is billed for the country Tuesday, lamented that the Ankara bombings were the most deadly in Turkey’s history.

The official death toll for now, is put at 97. This is however contradicted the figure provided by one of the main groups at the rally, which claimed it confirmed 128 casualties.

Funerals of victims among of whom were University undergraduates, which started Sunday, continued Monday.

The twin explosions erupted through a crowd of activists gathering outside the main railway station in the Turkish capital, Ankara

Some of the victims were scheduled to participate in a rally calling for an end to the violence between Turkish government forces and the militant Kurdistan Workers’ Party (PKK).

Already, there is resentment that Turkey authorities were unable to prevent such a major attack in the heart of the capital city – and some skepticism from opposition groups about the government’s claims.

But PM Davutoglu in a counter, said authorities were close to identifying one of the suicide bombers, using DNA tests, adding that this would help to establish the group that carried out the bloody attack.

Despite the PM’s suspect, some local media have implicated the brother of a man who carried out an IS bombing in the Southern border town of Suruc in July, which killed over 30 people.

Turkey announced after the Suruc attack that it would allow its southern Incerlik airbase to be used by the US-led coalition targeting IS in Syria.