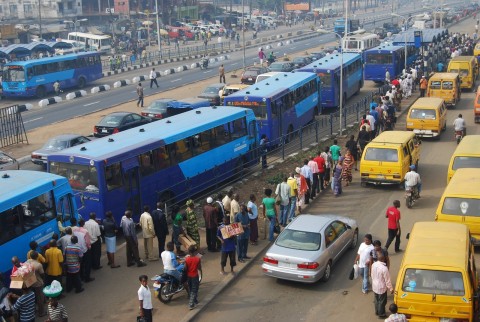 LAGOS, NIGERIA (AFRICAN EXAMINER) – Drivers of the Bus Rapid Transit (BRT) and ticketers on Tuesday embarked on strike over non-payment of salaries and arrears by the management of the scheme.

All BRT plying various routes in Lagos, especially Ikorodu axis were off the road this morning as they decided to commence the industrial action.

It was gathered that BRT staff receive around N50,000 pay package on monthly basis, but the management of the buses had not paid them for two months which led the drivers to embark on strike.

Commuters were stranded in the morning along the routes being plied by BRT as passengers did not see them.

The new BRT scheme is being run by Primero Transport Services Limited.

A staff, Mr. Sulaiman Hamed, explained that the BRT Leadership was yet to collect their July salary and that their monthly bonus had been reduced due to “stringent conditions” attached to the collection of the bonus.

“Primero is maltreating us; we are being sanctioned unnecessarily by the company. Sometimes, they do give us two weeks suspension on any slight mistake and they will deduct the money of the days we didn’t work, as a result of the suspension, from our bonus,” Hamed said.

He explained that some of the drivers would take the bus out and parked it somewhere without meeting up with the needed target and still collect the monthly salaries and bonuses.

According to him, what the management decided was to reduce the monthly salaries to N40,000 and increase the bonus to N40,000 so that those who did not work would only collect the N40,000 while those who meet up with the target would collect both.

Primero Transport Service Limited was recently given the sole franchise to manage the BRT scheme after the Lagos State Government terminated the National Union of Road Transport Workers (NURTW) franchise.

Since Primero began its operation, the total number of buses in the fleet of the company has increased from 70 to 394 buses.