US 2016: Obama Declares Trump “Unfit” To Be US President 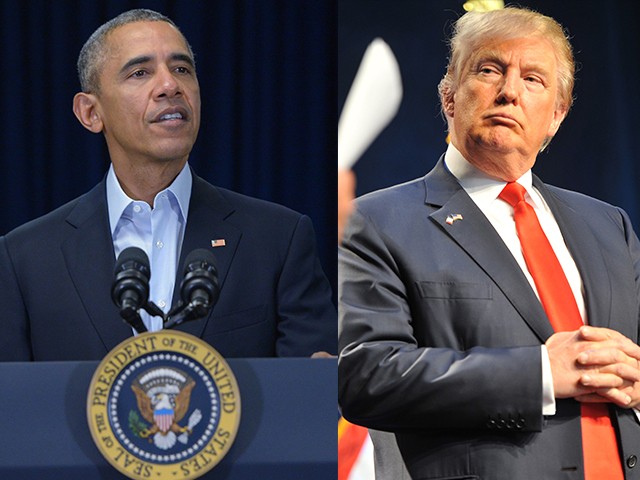 BALTIMORE, MD (AFRICAN EXAMINER) – US President has come heavily on the controversial Republican Presidential candidate, Mr. Donald Trump, declaring he is not fit to be elected the world President.
Obama insisted Trump is unfit to be President, asserting “There has to come a point at which you say: ‘Enough’. He also questioned why the Republican has sustained its support to the New York billionaire.
President Obama pointed out that despite his policy differences with previous Republican Presidents and candidates; still, he had never thought they could not function as President.

“The Republican nominee is unfit to serve as President and he keeps on proving it. The notion that he would attack a Gold Star family that made such extraordinary sacrifices… means that he is woefully unprepared to do this job” Obama maintained.

Obama also cited instances where the Republican are frequently clashed with Mr. Trump over his offensive statements and policies about women, undocumented immigrants and Muslims.

“What does this say about your party that this is your standard bearer”. This isn’t a situation where you have an episodic gaffe, this is daily and weekly where they are distancing themselves from statements he’s making. Mr Obama said.

It would be recalled at last week’s Democratic National Convention, Khizr Khan – a Muslim whose son was killed while serving in the US military in Iraq – criticized Mr. Trump’s plan to temporarily ban Muslims from entering the US.

Beside, Mr. Trump has been widely criticized for attacking the parents of a fallen US solider who spoke out against him.

He has also been condemned for backing the Russian annexation of Crimea.
Top Republican leaders such as House Speaker Paul Ryan and Senate Majority Leader Mitch McConnell have been repeatedly critical of Mr. Trump advances.

On Tuesday, New York Representative Richard Hanna became the first Republican member of Congress to publicly declare he would vote for Democrat candidate Hillary Clinton. Hanna clarified that Trump’s comments on the Khan’s family were the determinant factor.