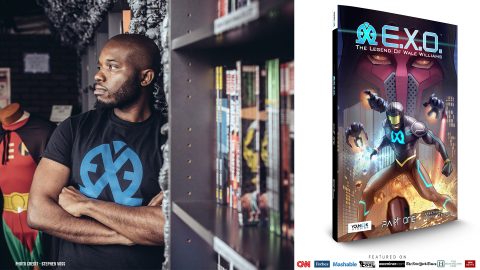 BALTIMORE, MD (AFRICAN EXAMINER) – Young Nigerian animator, Roye Okupe’s prominence is soaring as he has been featured on the popular American news site – Washington Post just as his second work arrived the country.

The Computer Scientist gained the distinct media mentioning over his a comic book company, YouNeek Studios.

Okupe arrived in the United States in 2002 and gained admission to George Washington University; bagged Bachelors and Master’s degrees in Computer Science in 2007 and 2009. It was within the period he attended and completed class in animation at the Art Institute of Washington.

Okupe who once worked as a web developer after his training, put together an eight-minute animated trailer, featuring his first ‘superhero’ creation – Wale Williams, a young, Nigerian who suits up in high-tech armor to become the African superhero E.X.O. (Endogenic Xoskeletal Ordnance).

“E.X.O. The Legend of Wale Williams” was the first superhero to debut from Roye Okupe’s YouNeek Studios in 2015.

It would be recalled the first E.X.O. comic debut on August 31, 2015 while the second arrived on Wednesday.