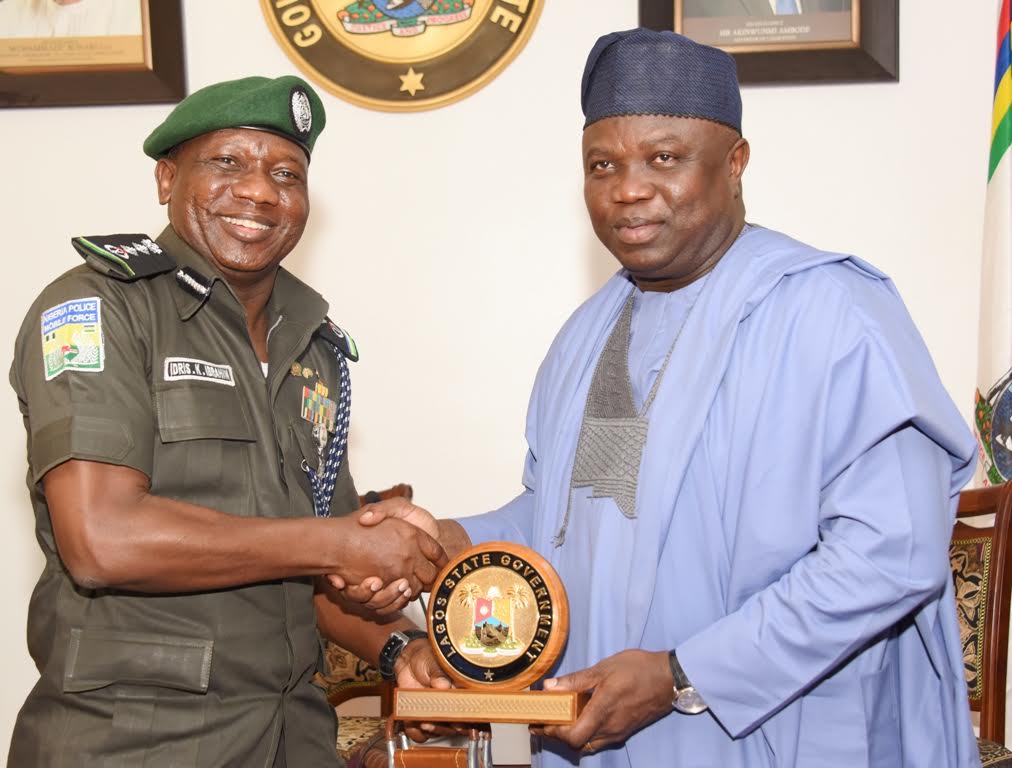 Lagos State Governor, Mr. Akinwunmi Ambode on Wednesday vowed that the State Government would deploy its entire arsenal to ensure that militants and vandals threatening the peace are flushed out of the State once and for all.

The Governor who spoke when he received the Acting Inspector General of Police, Mr. Idris Kpotun Ibrahim, who was on a courtesy visit to the Lagos House, Ikeja, said that the recent military onslaught in the areas where such criminal elements have been hibernating was yielding positive result, assuring that all efforts would be made to sustain the success recorded so far.

It would be recalled that in the last one week, a joint onslaught by the Nigeria Army, the Police and other security agencies was carried out some communities within the boundary of Lagos and Ogun State against militants and oil thieves who had been causing civil disturbances in recent times.

Governor Ambode said, “I want to also use this medium to commend the Nigeria Police and other security agencies on our fight against the militants and vandals that we have embarked on in this Operation Awatse in the last one week. I want to commend all the security agencies for a job well done, I also want to thank President Muhammadu Buhari for approving that operation by what we have seen, I also commend the Chief of Defence Staff for also approving the joint effort. We are already seeing the results. I have just been briefed this morning about the impact of what has been done.

“Again, we need to sustain and ensure that these people do not go back to the creeks. On our part as a government, whatever it is that it takes to take the militants and vandals off Lagos we are going to do it, if it means shutting down some locations where they seem to be hibernating in terms of any commercial trade, we would do it and make sure that we guarantee the lives of our people and whatever it takes in terms of financial support for the security agencies to sustain the success we’ve had in the last few days, we would do it.”

While thanking the Acting IGP for finding time to visit Lagos since his appointment, Governor Ambode appealed for more police presence in the State to secure the lives and property of the over 22 million population in the State.

“I want to thank you for visiting Lagos. You’ve worked in Lagos before. The Lagos of then and the Lagos of now is totally different, the population in Lagos is over 22 million and then the land space is not increasing, so the number of police officers that we have in regards to population is very meager. So as you recruit policemen, we appeal that more police officers be deployed to Lagos, we have space for them, we can build more police stations and we can equip them effectively,” he said.

Governor Ambode specifically requested for more police patrol of the waterways, assuring that his administration would play its own part by ensuring the welfare of officers in the line of duty is assured.

“We also want to say that we have reduced crime in Lagos by 70 per cent in the last six months, but again, some ugly points are coming out along our waterways. We want to partner with you to keep our waterways safe, we need a greater presence of Marine Police across our waters and we also know that we can support them by providing gun boats, but again we want to say that we would take proper care of welfare of police officers who are assigned to Lagos,” he said.

He also commended the Lagos State Security Trust Fund (LSSTF), saying that it was a model that other states of the federation can take a cue from.

“When I was Commissioner of Police in Kano State, we had to travel to Lagos to understudy the Security Trust Fund. So it has served as a model for other states in the federation.” the IGP said.

He also promised that the Police would continue to deploy the best of its officers in the country to the State.