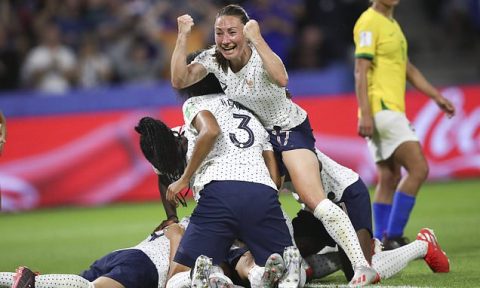 (AFRICAN EXAMINER) – France survived a tense extra-time knockout match against Brazil and advanced to the Women’s World Cup quarterfinals when captain Amandine Henry redirected Amel Majri’s free kick for a tiebreaking goal in the 107th minute of a 2-1 victory on Sunday night at Le Havre.

Valerie Gauvin, whose first-half goal was disallowed in a video review, put fourth-ranked France ahead in the 52nd minute but Thaisa tied the score 11 minutes later for No. 10 Brazil.

With the prospect of a penalty kick shootout growing, Henry scored on a left-footed shot for her 13th goal in 86 international appearances, her second goal of the tournament.

Brazil had a chance to go ahead near the end of the first extra-time period when Debinha broke in alone and beat goalkeeper Sarah Bouhaddi, but her shot headed toward goal was blocked in front of the line by defender Griedge Mbock Bathy.

The World Cup hosts, in the quarterfinals for the third straight time, will play the defending champion United States or Spain at Paris on Friday.