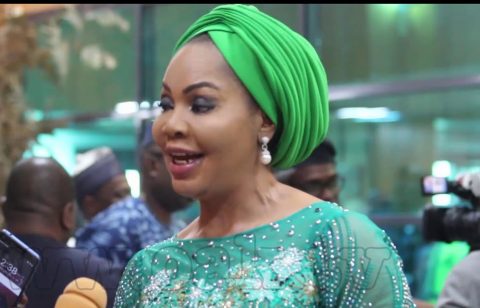 (AFRICAN EXAMINER) – Ahead of the inauguration of Nigeria’s 9th National Assembly (NASS), in June 2019, a coalition of South East Civil Society and Human Rights Organizations, have adopted and canvassed support for Hon. (Mrs) Nkeiruka Onyejeocha, of the ruling  All Progressive Congress (APC) from Abia state for the Speakership position of the federal House of Representatives.

It would be recalled that  Onyejeocha was first elected in 2007 to represent Isuikwuato/Umunneochi federal constituency of Abia State, Southeast Nigeria, under the platform of the Peoples Democratic Party the PDP.

She was however, re-elected for the 4th time in the just concluded 2019 general elections, under the of APC banner.

Addressing a press conference in Enugu Wednesday as part of measure to market her ambition, the group said without sounding immodest, “Rt. Hon. Nkeiruka Onyejeocha is the most qualified from the southeast to take the speakership position in the 9th Assembly.

Leader of the organizations, Dr. Jasper Uche of the Political Science Department, University of Nigeria Nsukka (UNN) who presented  position of the group to journalists, had hinged their argument on the fact that the female House of Representative member elect, has gotten all the experiences needed to steer the ship of the House of representatives, especially as a ranking member.

According to him,  “she had served in committees on Women in Parliament, Appropriation, Works, INEC, Police Affairs and Aviation, which she currently chairs since 2011. Before going to the National Assembly, she served as a Commissioner and a Local Government Chairman in Abia State.

Some of the  important motions she moved  while in the house are, “motion on erosion control in the 2 LGAs of Isuikwuato/Umunneochi federal constituency, relief for victims of ecological disasters, women and youth  empowerment protection of the weak, less privileged and the voiceless” amongst others.

They said as a member of the Aviation committee, Onyejeocha, attracted the on-going Nigeria Civil Aviation Technology (NCAT) Aircraft Engineering Maintenance School in Abia State, noting that  the two operational ones are only in Lagos and Kaduna, adding that she was the one that made a case for a bailout to ailing domestic airlines.

On why the position should come to South East, the group, posited that under the federal character principle “the southeast has not produced the Speaker since 1999.

In his comment, an Executive Director in the Civil Liberties organization organization CLO, Comrade Ibuchukwu Ezike, had called on all other members of House of Representatives from other geo-political zones of Nigeria, both old and new to give Onyejeocha  the support, she needs, stressing that going by her antecedent, she will not disappoint her colleagues, South East and nation in general.