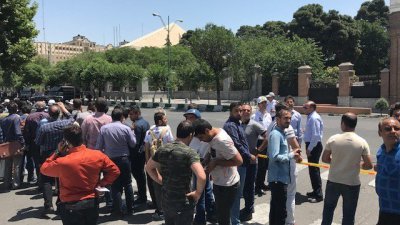 BALTIMORE, MD (AFRICAN EXAMINER) – No fewer than 12 people were killed while many injured Wednesday as twin bomb explosion hit the Iranian parliament building and Ayatollah Khomeini’s mausoleum in the capital, Tehran.

After hours of intermittent gunfire there, the attack on the parliament subsided. A suspected suicide bomber detonated a device at the mausoleum, as the Iranian officials managed to foil a third attack, which has been claimed by the Islamic State (IS) fighters.

The claimed attack by IS was the first in Iran since 2011 the group has entangled with the neighbouring Iraq’s authority.

Meanwhile, the Iranian authorities have denied that there had been a hostage situation inside the parliament building.

Reports said the suspected gunmen entered the parliament via a public entrance, and disguised as women.

It was reported that suspected four attackers inside the parliament building had been killed by security forces.

The attack started about 10:40 (06:10 GMT) when the terrorists at the mausoleum in southern Tehran, which is dedicated to the late Islamic Republic’s founder Ayatollah Khomeini, opened fire.

In the meantime, Tehran Governor has reportedly confirmed that one attacker has detonated a suicide vest while another had been killed by security forces.