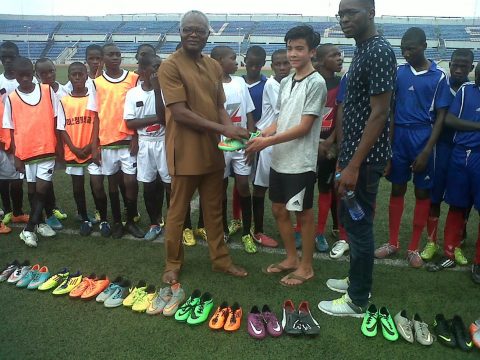 ENUGU NIGERIA, (AFRICAN EXAMINER) – A 13 year old United states of America,(USA) footballer, Alex Fung on sunday put smile on faces of his peers in Enugu, as he donated dozens of soccer boots valued several Thousands of dollars to the coal city boys.

Before making the presentation to the Enugu state football Association (FA) chairman, Hon. Chidi Offor Okenwa, at the main bowl of the Nnamdi Azikiwe stadium Enugu, for onward distribution to the State U-13 and 15 boys, Fung, had played an exhibition match with his Enugu state mates in the Astro turf pitch.

Speaking with sports writers shortly after the presentation, the young foreigner, who currently plays for the Massachusets U-13 state elite, New England Football club, (NEFC),said he was in Africa to give back to the society what he has gotten from it.

“I decided to do this in order to promote football in Nigeria; these are my mates, I need to encourage them;

“I spoke to my friends about this and they all gave their support to it by also donating their boots. It’s a great experience for me; I’m happy to associate with them.

Fung added that he was impressed with the performance of the Enugu U-13 boys during the exhibition match played in Abuja, during the recent visit of FIFA president, Gianni Infantino to the country.

While expressing appreciation to Fung, for the kind gesture, the FA chairman, called on Nigerians who have the capacity to emulate the young American in promoting soccer especially at the grass root in Enugu state, and Nigeria at large.

Offor: said: “We run the book to booth programme, which is basically an education and football interface programme, we ensure that players in U-10, U-13, U-15, U-17 and U-19 are in school as well;

“‎These boots is his way of giving back to the society, according to him, he told his friends he was going to Africa and they donated their boots.

“We shall make sure they are properly utilized; that’s why the players must size any one they will collect, so that we won’t have a situation where one will collect and sell

“The programme started since 2008 and it has produced so many players in the likes of Chisom Egbuchulam, Emeka Eze, Chidera Eze, Chikeluba, ‎among others.

Fung, was accompanied to Nigeria by an Enugu state indigene based in the US, Mr. Victor Obinna Edeh, who works with the Bayern Munich North American talent identification programme.

Edeh said: “Here in Nigeria he played at the match for the FIFA president; he visited both the U-13 and the U-17 camps; this is the climax and we are happy about it; my foundation facilitated the exercise and we thank him so much for it.