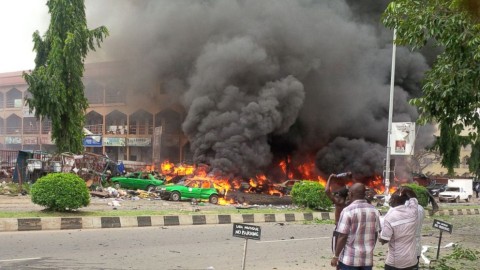 The Nigeria police have confirmed 21 dead in an explosion that rocked the EMAB plaza Wednesday afternoon.

The force revealed another 17 victims sustained various degrees of injuries, while the figure of automobile burnt by the blast has been put at 17. 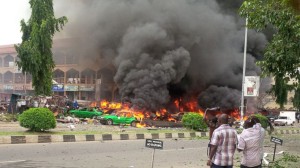 Scene of Wednesday’s explosion in Abuja

Eyewitness at the scene told African Examiner Online that the explosion occurred at about 4pm at the gate of the busy plaza.

Traders at the plaza said some of those affected were petty traders who always display their stocks at the entrance of the plaza.

An eyewitness said Muslim worshipers were preparing to observe the evening prayer in the mosque closed to the scene when the explosion erupted, adding that the early worshippers were affected.

Meanwhile, the News Agency of Nigeria (NAN) reports that the military had killed one of the suspected bombers who stormed the plaza with motorcycle while another was arrested.