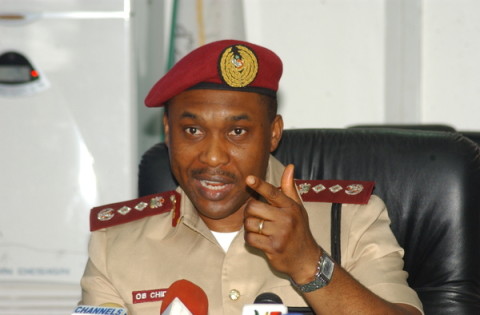 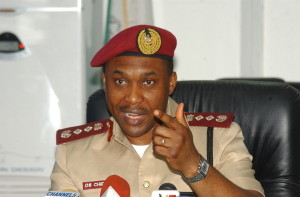 The Federal Road Safety Corps, FRSC, says Nigeria has recorded a total of 1,397 road traffic crashes involving commercial buses between January to June this year, saying  1,437 persons  lost their lives in the crashes.

To check the ugly trend, the corps, has vowed to enforce what it called “speed limit governors”, a device that curtails excessive speeding, on commercial buses plying Nigeria roads.

FRSC Corps Marshal, Osita Chidoka disclosed this Tuesday in Enugu during a Stakeholders meeting on speed limitation and other devices on commercial vehicles.

He explained that the device became essential in other to reduce the stress and trauma that the nation has suffered from road carnage occasioned by drivers who get unnecessarily thrilled by speed.

The organisation, therefore assured the public that it will aggressively enforce the regulations on speed violations as it sustains the on-going public sensitization programme of the speed control device.

Chidoka, who who spoke through Enugu state sector commander of the corps, Funmibi Olawoyin, stated that the command decided to embark on the public sensitization programme so as to make relevant stakeholders realize the consequences of speed violation and the benefits of using speed governors as effective measure to check avoidable crashes on Nigeria highways.

The FRSC boss said that speed limit devices have been found to be an effective means of preventing speed violations and resultant consequences, as they reduce the speed at which vehicles can travel to prescribed limit.

He also hinted that among other benefits, the use of devices not only ensures that the drive operate within limit of speed regulation, but also adds to fuel the economy and increases the ability of the driver to maneuver in the event of crash.

His words: “Furthermore it prolongs the life of the vehicle and generally aids other safety devices to function optimally in time of need,” said Chidoka.

He disclosed that Peace Mass Transit Limited has voluntarily started the installation of speed limiters in their buses, just like the ABC Transport has also installed the devices with very positive outcomes.

Said the Corps Marshal: “between January and June this year, a total of 1,397 buses were involved in road traffic crashes killing 1,437 and injured 6,831.

“From extensive investigations and analysis of commuter vehicles carried out by FRSC over a six year period (2007-2012), it was found that the frequencies of crashes involving Toyota Hiace buses was a total of 1, 844 crashes while it is important to note that Toyota Haice brand is dominant brand in the commuter bus category, we still hold the view that the crash record is not acceptable”. He declared