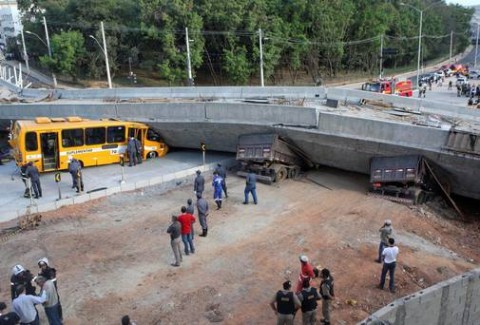 The ongoing world football tournament in Brazil recorded a disaster last night as a flyover collapsed onto vehicles in the mundial host city of Belo Horizonte, killing two people. 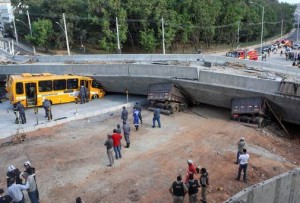 The concrete and steel bridge, which was under construction, fell onto traffic on a busy highway. The flyover is part of the World Cup infrastructures aimed at improving Belo Horizonte’s public transport system.

The scene of the accident is near the busy district of Lagoa da Pampulha and the Mineirao Stadium, which has played host to several World Cup matches.

The front of a commuter bus was crushed along with two unoccupied construction trucks. A car was also reported crashed.

The south-eastern Brazilian city is billed to host one of the World Cup semi-final matches next week.

The state of Minas Gerais health department, of which Belo Horizonte is the capital, said the bus driver and another person were killed, while 22 people were injured.

Meanwhile, the Brazilian President Dilma Rousseff expressed on twitter that the incident was received “with sadness”. She added she had found out about the accident, and offered her “solidarity to the victims’ families”.

BBC reported that the construction firm building the flyover, Cowan, said it “deeply regrets what happened”.

“At the moment, the priority is to support victims and their families. The company says in a statement that it has already sent technical staff to the scene to start investigations.”

Brazil’s preparations for the World Cup were replete with accidents. At least seven workers were killed at a stadium prior to the takeoff of the tournament. Last month, a worker was killed after a beam fell during construction of a monorail in Brazil’s biggest city, Sao Paulo.