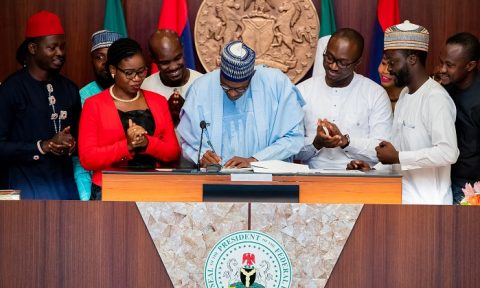 (AFRICAN EXAMINER) – As he promised to do in his National broadcast Tuesday to mark this year’s Democracy Day, President Muhammadu Buhari has signed into law, the `Not Too Young To Run Bill’.

While signing the bill Thursday in Abuja, Buhari on a lighter note, appealed to young Nigerians to defer their Presidential ambition till after the 2019 general elections.

This is apparently to avoid the youths’ contest for Presidency clashing with his own, having already declared to seek re-election next year.

President Buhari however, noted that the new Law did not tamper with the age qualifications for Governor and the Senate, as they still remain at 35.