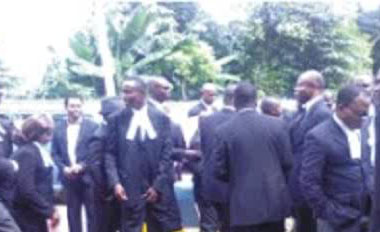 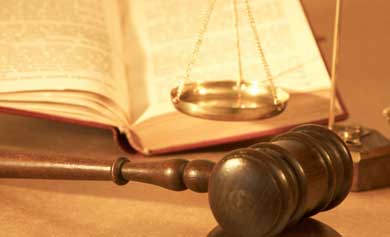 Members of the Aba chapter of Nigeria Bar Association NBA on Thursday threw decorum to the wind at the Aba High court complex, as they prevented Justice Theresa Uzokwe, from presiding over a special court session in honour of their late former chairman, Chief Simeon Ihekwoazu.

The situation, however threw the entire court premises into serious pandemonium, as the lawyers engaged the judge in a shouting match. 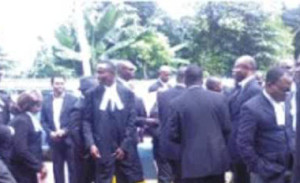 African Examiner gathered that the lawyers had threatened to deal with Justice Uzokwe, if she failed to leave the venue, when the embattled Judge made moves to preside over the session.

The supposedly learned gentle men, insisted that the Judge cannot be allowed to preside at any function where members of the Aba branch of the NBA are in attendance.

One of the lawyers, who do not want his name in  print, told our correspondent that the Judge would have been beaten up if she had refused to leave the court complex on time.

He said “we passed a resolution to boycott Justice T.U Uzokwe’s court. Since then, she doesn’t attend our functions but I don’t know why she chose to attend this one and even wanted to preside over the special session.

“We had our way as she left the venue when it was clear to her that she would be beaten up. We will continue to do this until she is transferred out of Aba Judicial Division,” he stated

However, our correspondent further learnt that Justice K.C Nwankpa who stood in for the Acting Chief Judge of the state later presided over the special session assisted by other judges.

It would be recalled that the embattled  Justice Uzokwe, who presides  over High Court 2, Aba has been having a running battle with the NBA in the commercial city of Aba,  over alleged professional misconduct.

African Examiner, reports that Aba NBA had in 2012 passed a resolution to boycott Justice Uzokwe,s court until she is transferred out of Aba Judicial Division.

Since the battle started, between the Aba lawyers and the judge, its members have continued to picket her court; a development, that has been paralysing activities at the High court.

The unfortunate situation according to a close source to the court, has forced litigants to start applying for the transfer of their cases to other places.

A former Acting Chief Judge of the state, Justice Shedrack Nwanosike was said to have intervened in crisis some time ago, but the branch, refused to shift ground on her demand for the Judge’s transfer.

In a resolution signed by the then chairman and secretary of the Aba NBA, Chief Charles Eduzor and Kelechi Ukaumunna, the branch insisted that the demand for the transfer of Justice Uzokwe out of Aba Judicial Division was not negotiable.

Some of the allegations against Justice Uzokwe, includes that she had ordered several lawyers to kneel down when their phones mistakenly rang during court session.

The Aba NBA, also accused her of allegedly ordering the smashing of a lawyer’s phone some time ago, as well as made him to stand behind the dock for over three hours, and always asking litigants to kneel down and raise hands up on flimsy excuses, amongst other accusations.