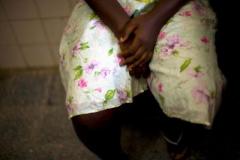 Mr. Samuel Uba, a 65 year-old man in Kalabari Beach (KB) in Oguta Local Government Area of Imo State, on friday narrowly escaped lynching by angry youths for being responsible for the pregnancy of his 17 year old daughter, Anna Uba.

African Examiner gathered that the alleged randy father hails from Ibiasegbe in Oru West LGA of Imo state but resides in KB where he taps rubber.

Uba, who  claims to be a Church elder at Christian Pentecostal Mission (C.P.M), has eleven (11) children from his two late wives is now expecting another one from Anna, his fourth daughter.

Meanwhile, there was confusion in the town when youths of the area on confirming that Samuel Uba is allegedly responsible for the daughter’s pregnancy, besieged his residence, and dragged him out for beating.

The youths already descended on the randy father before a passerby who is a lawyer intervened, and told them not to take the laws into their hands.

In an interview with our correspondent, the suspect, claimed that the illicit act started five months ago when he forcefully had carnal knowledge of his daughter and in the process defiled her.

The 65 year old claimed  he slept with Anna six times until the sex escapade was exposed by the daughter’s pregnancy.

Uba however, said he is ready to appease the land and prayed for forgiveness from all, claiming that he was the handiwork of the devil.

While narrating her ordeal,the pregnant daughter, alleged that her father came to her room one night and forced himself on top of her after removing her clothes.

The 17-year old girl who is a junior student of St Michaels Secondary School, Orsu-Obodo, said that her father threaten to deal with her if she reports the incident to anybody.

African Examiner;s further investigation reveals that Uba had already made arrangement to sell the baby immediately her daughter puts to bed, an intention Ann, vehemently opposed.

The pregnant girl,  claimed that she reported to her father immediately she stopped observing her monthly flow of menstruation, adding that the evil father didn’t say anything.

Meanwhile, pastor Donatus Ossy of Christian Pentecostal Mission (CPM) where the incestuous family worships,dismissed reports  that Uba was an elder in the church.

While narrating his side of the story, Pastor Ossy  said that he made efforts to unravel the circumstances and persons behind the young girl’s pregnancy but at a point, the family was not forthcoming.

The cleric said he was shocked in the “spirit” having realized it was his church member, declaring that the man is a total disappointment.