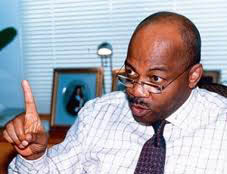 Lagos based Constitutional lawyer, chief Olisa Agbakoba, senior Advocate of Nigeria (SAN), has advised Nigerians irrespective of political, ethnic, and religious affiliation, to embrace the proposed National conference (CONFAB), saying it will be an opportunity to address most of the age long injustices meted on some segments of the nation.

He noted that though, similar dialogues in the past did not yield any positive result in the country, but “let’s embrace this particular one because it will be an opportunity and platform for us to address some of the lopsidedness in the nation’s scheme of things.

The Human Rights lawyer, who spoke to newsmen Thursday in Enugu, regretted that  after wasting huge government resources in the past in the name of national conferences,  things became worst in the country.

He however, urged different segments of the country to see the present planned National dialogue beyond ethnicity, insisting that it is only through such dialogue that the people could come together to examine and resolve all long standing impediments that had continue to hinder the nation’s development.

According to the legal luminary, Nigeria as a nation, cannot continue to exist under its present unfortunate situation, where a lot of things and factors are already threatening the cooperate existence of the citizenry.

The people of Nigeria, he emphasised, must take the planned national conversation very seriously, because it is the only way to also calm tensions in the land as well as attend to issues that over time are on the front burner, especially as it relates to total neglect and marginalization of certain parts of Nigeria.

Agbakoba, a former National president of Nigeria Bar Association NBA, further enjoined leaders in various parts of the country to begin to enlighten their people on   the need for them to lend their  weight behind the CONFAB, saying it would also provide the people the opportunity  to channel all their misgivings, grievances and opinions on burning national issues.

He therefore, called on leaders of Igbo race, to come together and articulate a common stand that would be presented at the conference.