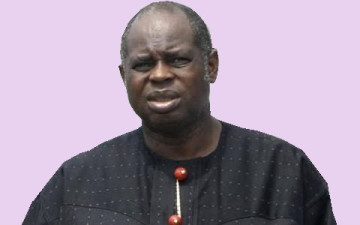 Former governors under the aegis of ‘Class of ’99’ on Thursday in Yengoa, commiserated with the people of Bayelsa State following the death of their colleague and first governor of the state, Chief Diepreye S.P. Alamieyeseigha.

They specifically commended Governor Henry Seriake Dickson for following the footsteps of Alamieyeseigha in strengthening the dominant position of the Peoples Democratic Party (PDP) and sustaining the Niger Delta struggle in the state.

A former governor of Edo State, Chief Lucky Igbinedion, who led the delegation conveyed the condolences of the group, which comprises former governors who served the country from the inception of the present democratic dispensation in 1999.

They later paid a similar visit to the deceased family

Igbinedion expressed sadness over the passage of the Governor-General of the Ijaw nation, describing him as a fearless fighter who vehemently championed the struggle of true democracy and resource control in the country alongside other Niger Delta governors, which culminated in the emergence of a South-Southerner, Dr Goodluck Jonathan, as a President of Nigeria.

He said that although the demise of their former colleague has created a vacuum in Bayelsa, the Niger Delta and the country at large, those who believe in the political philosophy and ideals should not only take solace in the legacies he has bequeathed but also sustain them for the benefit of posterity.

In this regard, he lauded Governor Dickson for exhibiting some of the leadership qualities of Chief Alamieyeseigha especially in the area of promoting the interest of the Ijaw and Niger Delta people within the context of the larger Nigerian nation.

Chief Igbinedion also commended the Bayelsa State Government for the steps taken so far to give its former governor a befitting burial and assured the governor of the group’s readiness to participate fully in the final rites of passage.

He said, “This democracy we are enjoying today is as a result of the solid foundation that the Class of 99 laid. No matter what anybody says without a solid foundation no building can stand for this long. DSP Alamieyeseigha was in the forefront of that struggle for true democracy, true federalism and fiscal responsibility, and above all, the struggle for the Niger Delta.

“But I am glad that you are carrying on the struggle and representing what we stood for then because you have not given up the fight, and I believe until we reach that Promised Land, we can be responsible for our own resources, where we can give testimony for what we use our resources for our people. We have not arrived, but at least we have started.”

Responding, Governor Dickson expressed appreciation to the delegation and all Nigerians for their show of love and concern over the sad incident, noting that the visit would further strengthen the government, the bereaved family and people of the state.

Dickson said the state government and other stakeholders were still consulting with the Alamieyeseigha family on how best to honour the late Ijaw leader even at death, adding that the date and other relevant details about the burial would be transmitted to the group to enable them participate in it.