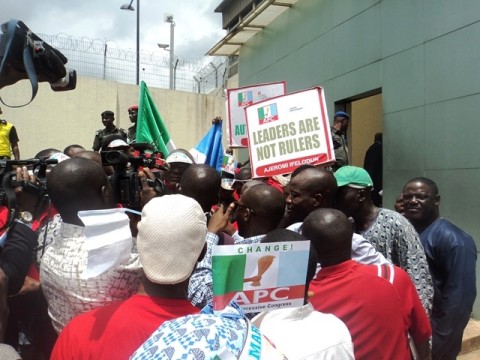 Hundreds of members of the All Progressive Congress (APC) in Lagos State, Nigeria stormed Governor Babatunde Fashola’s office on Monday protesting the imposition of Akinwunmi Ambode as the governorship flag bearer of the party in next year’s gubernatorial poll in the state by Asiwaju Bola Tinubu. 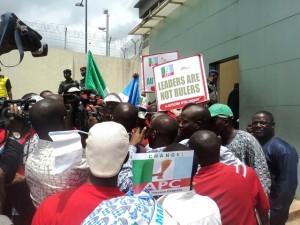 The protesters, under the aegis of New Lagos Movement, a group in the APC accused the National Leader of the APC, Tinubu of imposing Ambode on the party even when the primaries have not been held.

There was traffic gridlock around the State House of Assembly and the road leading to the governor’s office as the protesters marched from the party’s secretariat on Acme Road to Fashola’s office to express their grievances.

The protesters occupied the entrance to the governor’s office as they were not allowed into the premises as security operatives prevented them from gaining entrance.

The group carried placards, some of which read: “We are tired of one man decision,” “No to autocracy,” “No more Ogo sope,” “No to Consensus Candidates,” “Leaders are not rulers and internal democracy,” among others.

Leader of the protesters, Mr. Niyi Akinsinju said the voice of the silent majority would be resurrected if Tinubu went ahead with what he is noted for by imposing Ambode on the people of Lagos State.

“We are loyal party, members, but we are angry and we are frustrated because we believe some people believe they can rule over us and we say you cannot replace democracy with autocracy. When you impose a candidate on the people that candidate will not be responsible to the people but those who imposed them and if you are saying that democracy is about the people then let the people elect who will represent them so that those people will be responsible and accountable to them. It is as simple as that,” he said.

According to him, Tinubu has a tradition of leading governor’s advisory council, which is not an organ recognized by APC’s constitution to endorse candidates for election.

“Tinubu is our leader, he can endorse anybody he wants. But we want to have right to this power, it should not be a monopoly of somebody alone,” adding that there would be no problem if Ambode emerged through primaries.

“As long as the people have a voice, we have no problem, we may have as many as 100 aspirants, but let the people go to the field,” he added.

Receiving the protesters, Lagos Commissioner for the Environment, Mr. Tunji Bello said party was not contemplating imposing any aspirant on the people and that all of them would be made to go through primaries.