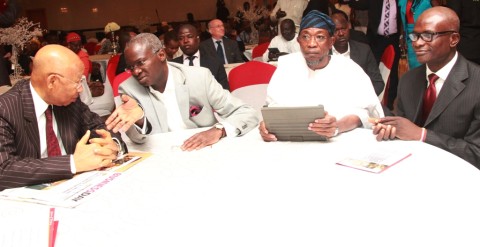 Governor of the State of Osun, Ogbeni Rauf Aregbesola has called for a nationwide protest against Boko Haram over the sect’s abduction of 234 school girls at the Chibok Government Girls Secondary School, Borno State, Nigeria last week. 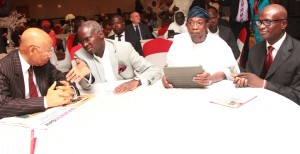 Lagos State Governor, Mr. Babatunde Fashola SAN (left) discussing with his Osun State counterpart, Ogbeni Rauf Aregbesola (middle) while the author of the book and Commissioner for Information and Strategy, Mr. Lateef Ibirogba (right) watches with admiration during his Public presentation of the book “Giants of History” at the Civic Centre, Ozumba Mbadiwe Avenue, Victoria Island, Lagos, on Tuesday, April 22, 2014.

Aregbesola, who spoke at a book the public presentation of a book authored by the Lagos State Commissioner for Information and Strategy, Lateef Ibirogba in Lagos said it is time Nigerians staged a massive protest against Boko Haram, saying that the kidnap of the girls represents a national disaster.

Aregbesola said it was frightening that over one week after it was reported that Islamic extremists besieged the school in North East Nigeria and abducted the girls, there has been no lead as to where the girls have been taken to.

According to Aregbesola, Nigerians were gradually accepting the trend of kidnapping as a normal occurrence, lamenting that girls who left their homes in search of educational pursuit have ended up as companions to criminals and sycophants.

“I don’t even know what to say than to urge everybody to do anything humanly possible collectively and individually to put an end to this sad development. The Federal Government must rise up to this. Everyone in authority must act now. It is not only degrading us as a people, it is defaming us,” he said.

Aregbesola said as horrible as Afghanistan was there was no case of human beings abducted, saying “we talk of no man’s land of West Afghanistan, such does not happen. Nigeria is heading to the level that does not recognize us as civilized people and human beings anymore and it is a shame.

“I should not have said this here considering my position in the polity but what is my choice? When school children are being abducted in schools and we carry on as if it is mere statistics. It is not. We must protest on the streets to tell all of us that enough is enough.”