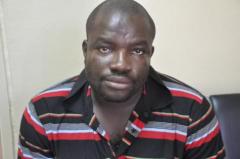 Nigerian Army have handed over Three suspected oil thieves arrested by officers of the Guards Brigade to the Economic and Financial Crimes Commission ( EFCC) for further investigation and possible prosecution.

One of the three suspects

The suspects: Gbenga Olusegun , Mohammed Yusuf, Auwal Abbas were arrested on May 12, 2014 at Toto Check Point, Keffi, Nasarawa State with a truck loaded with 33,000 litres of petroleum product suspected to be crude oil, and a Honda Civic Car.

Head, Extractive Industry Fraud Section, Ibrahim Yidi who received the suspects on behalf of the EFCC said the commission will investigate the suspects and charge them to court after investigations.