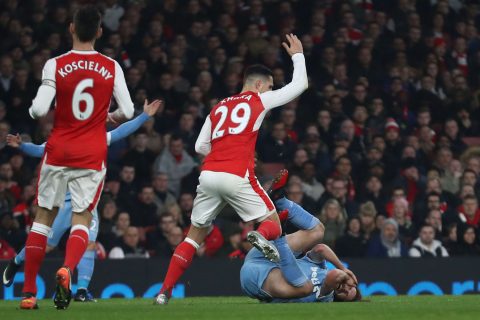 BALTIMORE, MD (AFRICAN EXAMINER) – Arsenal on Sunday lost their bid in qualifying for the Champions League, the first time in 19 consecutive seasons.

Hope initially grew among the home support when Hector Bellerin gave the Gunners an early lead and news filtered through that Liverpool were struggling against the relegated Tees siders.

But in first-half stoppage time Georginio Wijnaldum put the Reds ahead with a stunning strike, and Jurgen Klopp’s men eventually ran out comfortable winners.

Reacting, Arsenal Manager Arsene Wenger said: “It is annoying but we had a spell during the season that was difficult and it was difficult for me in my personal situation.

“We were playing in a hostile environment. The players came back stronger in the last two months and I’m very proud of them for doing that.”

With the Arsenal predictable defeat, the Reds will now play in the Champions League for the first time since the 2014-15 season.

They had suffered from early nerves at Anfield before Wijnaldum’s opener on the stroke of half-time eased the tension.

Philippe Coutinho added a second after the break with a free-kick, and Adam Lallana slotted in to make it 3-0.

On their own, Manchester City sealed third spot and automatic qualification for the Champions League group stage with an emphatic 5-0 win at Watford.

Pep Guardiola’s side required only a point to secure a top-four place, but instead of sitting back went about dismantling their opponents.

Guardiola declared: “We were under a lot of pressure. Congratulations to Chelsea and to Tottenham, we are so glad to be third.

“It is not a club with history of playing in Europe like Manchester United or Arsenal. But now we are there five or six years and now we can try to close the gap on the elite.

“The best teams in Europe will be at the Etihad Stadium next season. I don’t know what we need to add. This is one of the best groups I have ever trained – they never gave up. It was a pleasure to be with them.”