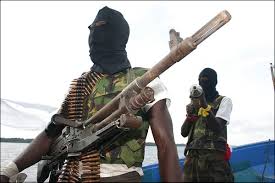 (AFRICAN EXAMINER) – The people of Peremabiri in Southern Ijaw Local Government Area‎ of Bayelsa State on Wednesday commended the Federal Government for coming to free them from the hands of a notorious criminal gang that has been terrorizing their community.

According to them, the decision of the Federal Government to send security agencies has made them to breath the air of freedom again as they had been in captivity for so long.

The indigenes under the aegis of Peremabiri Development Association (PDA), in a communique issued after its emergency meeting in Yenagoa, said the gang led by a brutish militant, Paul Eris a.k.a “General” Ogubbos, had even attempted to foist on them an unpopular leadership.

The DPA thanked the government for arresting some of the brigands ‎and arraigning them before a competent court of jurisdiction.

The organisation called on the security agencies to apprehend the criminal elements fleeing the community in order to rid the community of such criminals.

The PDA stated that the women who staged a protest on Wednesday because of the intervention by the military did so in fear because they were threatened by the notorious militant leader.

The statement reads: “We are in support of the routine operation which took place in our community. Our joy is full because we have been living in bondage for so long. This has affected our lives as we live in fear everyday..

“The intervention has brought some relaxation in our community as we now move freely. We are excited because if not for the action of the military, they would have imposed an unpopular man as our paramount ruler.

“We have confidence in the federal government and so we appeal to them to go after the rest members of the gang to ensure that they never return to our community. Those women who protested did so because they were forced and not out of any loyalty”.