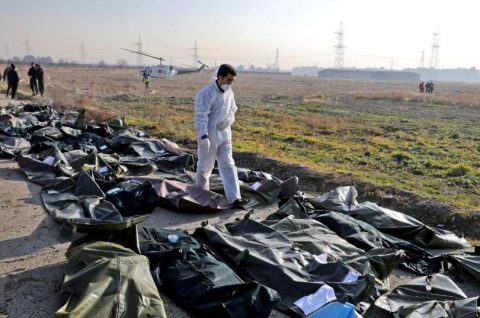 (AFRICAN EXAMINER) – After maintaining for days that there was no evidence to show one of its missiles had struck the plane, the Iranian military said it was an accident caused by human error.

Iran announced early Saturday that it had accidentally shot down a Ukrainian passenger jet, blaming it on human error because of what it called the plane’s sharp, unexpected turn toward a sensitive military base, according to a statement issued by the country’s military.

The announcement reversed Iran’s claims that mechanical issues caused the crash of the aircraft on Wednesday, which killed all 176 people aboard.

It had persistently denied that Iranian military defenses had downed the aircraft, a Boeing 737-800.

The Iranian military’s statement said the plane “took the flying posture and altitude of an enemy target as it came close to an Iranian Revolutionary Guards Corps base.

It said that “under these circumstances, because of human error,” the plane “came under fire.”

International pressure had been building on Iran to take responsibility.

American and allied intelligence assessments have said that Iranian missiles brought down the plane, most likely by accident, amid the heightened tensions between the United States and Iran./NYT