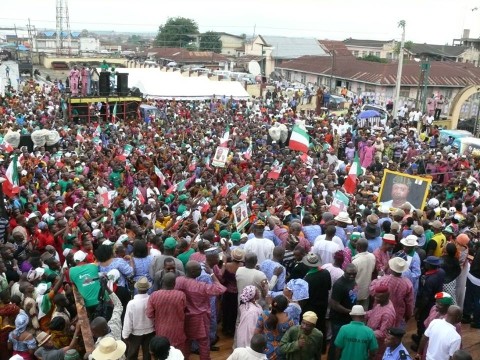 Our Correspondent reports that SSS officers attached to Sen. Omisore were injured in the attack. Also, the vehicle conveying the party chairman, Alh Gani Olaoluwa was badly smashed though both Omisore and other party Chiefs escaped unhurt.

The attack was allegedly led by the “state boys”, a group of political thugs  working for the All Progressive Congress (APC).

The Director of media and strategy of Omisore’s campaign organization, Mr Diran Odeyemi said in a statement that it was APC supporters that instigated the violence.

His words: “Since the commencement of our rallies, we have not recorded any violence or breach of the peace. You will recall that Aregbesola had said at different campaign fora that Osun would march on blood if he fails to win the August 9 governorship poll.”

“Out of desperation to win at all costs, Aregbesola had on four occasions called on voters to go to polling booths with charms and weapons and that they should also confront soldiers in defending their votes. So, what happened in Ilesa today may be a signpost of their planned violence before, during and after August 9, 2014.”