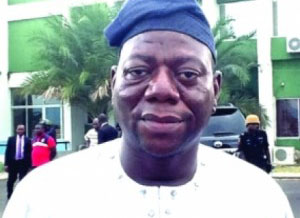 The Speaker of the Taraba State House of Assembly, Rt. Hon. Haruna Tsokwa, is dead.  He took ill last Thursday and was rushed to the Federal Medical Centre, Jalingo,

Assembly Spokesman, Tanko Kaura confirmed the death of the Speaker. Kefas Sule, special assistant media to the Acting Governor, Garba Umar also confirmed that,  “He died this morning, after just a brief illness”.

The late Tsokwa had escaped death by the whiskers on September 19 when suspected assassins attacked his convoy along the Jos – Abuja road.

Late Hon. Tsokwa moved from obscurity to national news headlines recently when he turned down the request of the ailing Governor Danbaba Suntai to resume work as governor after returning from abroad where he went to receive treatments following a plane crash that almost took his life.

Late Tsokwa insisted that the ailing governor was not fit to resume work and that he should return to the hospital to fully recuperate.

The late speaker was 47 years old.

Meanwhile, Speaker of the House of Representatives, Rt. Hon Aminu Waziri Tambuwal, has said the news of the death of the Speaker of Taraba State House of Assembly, Rt. Hon Haruna Tsokwa, came to him as a rude shock, saying it was a painful loss that will take long time to heal.

In a statement issued in Abuja by his Special Adviser on Media and Public Affairs, Malam Imam Imam, Tambuwal said the deceased lived an examplary life of dedication and commitment to duty.

According to him, the late Speaker was a patriotic Nigerian whose commitment to the development and independence of the legislature will be greatly missed especially by his colleagues in the Taraba State House of Assembly.

Tambuwal said late Tsokwa combined family life and his duties as a public servant in a commendable manner, and prayed to Almighty God to give his family, the people of Taraba State and Nigerians as a whole the fortitude to bear the irreparable loss.