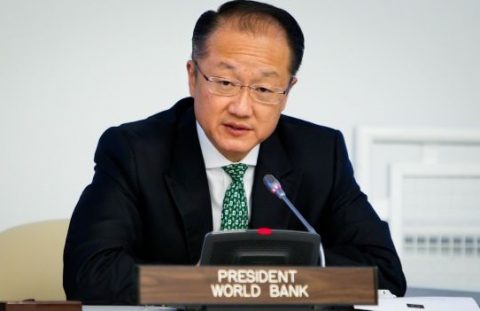 Mr Kim disclosed this during a press conference in Washington, DC at the ongoing 2017 annual 2017 Annual Meetings of the World Bank Group and the International Monetary Fund (IMF).

The world bank president added that following President Buhari’s request, the group has actually invested in the north warning Nigeria against over dependence on oil even as he underscored investments in  human capital development.

“You know, in my very first meeting with President Buhari he said specifically that he would like us to shift our focus to the northern regions of Nigeria and we’ve done that.  Now, it has been very difficult.  The work there has been very, very difficult.  I think Nigeria, of course, has suffered from the dropping oil prices.

“I think things are just now getting better.  But the conversation we need to have with Nigeria, I think, is in many ways, related to the theme that I brought to the table just this past week which is, investment in human capital.  The percentage of GDP that Nigeria spends on healthcare is less than one percent.  Despite that, there is so much turbulence in the northern part of the country, and there is the hit that was taken from the drop in the oil prices.

“Nigeria has to think ahead and investing in its people, investing in the things that will allow Nigeria to be a thriving, rapidly growing economy in the future, is what the country has to focus on right now.  It can’t rely just on oil prices going back up.  It has to think, what are going to be the sources of growth in the future for Nigeria in what will surely be a more digitalized economy.

And this is true for most of Africa.

“If you look at the numbers in terms of how successfully African countries have invested into their human beings versus other regions, there is a real issue.  And so, over this next year, not only in Nigeria but in all of Africa.  We’re going to focus on accelerating investments in human capital we call it but investments in health, education, social protection, so that Africa can prepare itself for the next phase in economic development.

“One of the real questions that we all have is our traditional notions of economic growth which are agriculture, to light industry to heavy industry.  How many countries in Africa will actually experience that, and do we need to really think about another kind of path to economic growth that’s very focused on a small to medium enterprise as an entrepreneurship as they have in other parts of the world.  I think we still don’t know that.  But the one thing we know, the one thing we know, is that better health outcomes, better education outcomes will be critical no matter what the global economy looks like. So, yes focus on the north, hope that as commodity prices stabilize, oil prices come back up and the economy will grow a bit more but very, very much focus on what the drivers of growth in the future will be.” He said