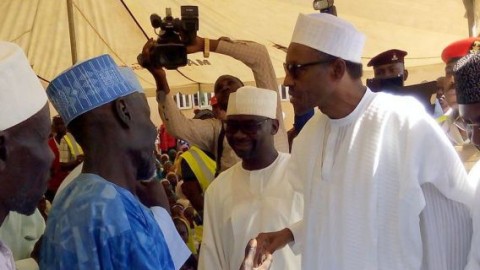 President Muhammadu Buhari Friday in Yola, the Adamawa State capital honoured three soldiers who were seriously injured in the ongoing operations against Boko Haram insurgents, with the Purple Heart medal for gallantry.

The award took place during Mr. President’s morale-boosting visit to the Nigerian military in the North Eastern State.
At the conferment ceremony, President Buhari explained that the honour to the three wounded soldiers was in appreciation of their heroic contributions to the ongoing effort by the Nigerian Armed Forces to end the Boko Haram insurgency.

“These very deserved medals are in recognition of your sacrifices. I hope it will inspire you to give more to the nation and I urge you to maintain your determination to bring peace to our fatherland.
“With what I have seen today, I believe that the Boko Haram are very close to defeat and I urge you to quickly clear the remnants of these criminals from wherever they may still be hiding.
“I also urge you to remain vigilant, alert and focused to prevent Boko Haram from sneaking into our communities to attack soft targets,’’ the President said in a statement issued by his SSA on Media and Publicity, Garba Shehu.

The medal is presented to men and officers of the Nigerian Armed Forces who have served gallantly in theater of operations in the North east beyond six months.
Commending the armed forces for successes so far recorded in the ongoing fight against the insurgents, Buhari urged the soldiers to remain focused on the objective of completely defeating Boko Haram before the end of the year.
The President assured them that the welfare of troops in the frontline states will continue to be improved by his administration.

President Buhari also urged the army to continue to operate within its rules of engagement and with due regard for human rights and its responsibility to protect civilians in areas of conflict.
In the same vein, the President visited the Internally Displaced Persons (IDP) camps in Malkohio, Jimieta, Yola, where he assured the refuge seekers that the Federal Government was doing everything possible to ensure the safe return of all displaced Nigerians to their native communities.