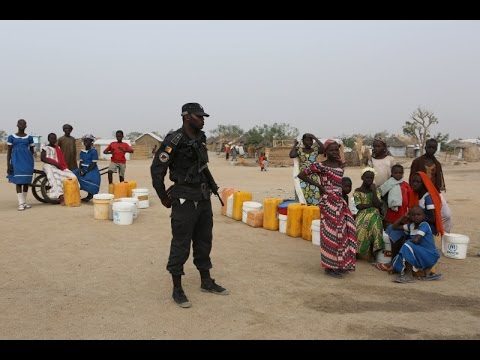 ABUJA, NIGERIA (AFRICAN EXAMINER) – President Muhammadu Buhari has urged rich countries to take urgent actions to save the Lake Chad from extinction, due to effects of climate change.

The President gave the task Thursday in Abuja while receiving the Director-General of UNESCO, Ms Irina Bokova.

Buhari warned that the failure to regenerate the Lake Chad would lead to another round of migration by the people living in the areas.

In a statement by his SSA on Media and Publicity, Mallam Garba Shehu, the President, who led seven Ministers to an interactive meeting with the UNESCO chief, said Nigeria and the other countries of the Lake Chad Basin lacked the billions of dollars required to channel water from the Congo Basin into the lake to check its rapid depletion.

“Those living in the Lake Chad region have suffered untold hardship and displacement because of the violence perpetrated by Boko Haram terrorists.

‘‘If there is no farming and fishing, they will dare the desert to migrate.

“Unless the developed countries make concerted efforts to complete the feasibility study, mobilize resources and technology to start the water transfer from the Congo Basin, the Lake Chad will dry up.

‘‘The people will go somewhere and they will create problems for those countries,” the President told the visiting UN official.

He said the pathetic situation of IDPs required immediate and urgent response from international organizations such as UNSECO to provide infrastructure, health and education for the people in the area.

The UNESCO Director-General, Mrs. Bokova, who commenced a week-long visit to West and Central Africa on August 6, said she was in Nigeria to strengthen the organization’s programme in the areas of science and technology, gender and youth development, culture, water resources development, health and environment.