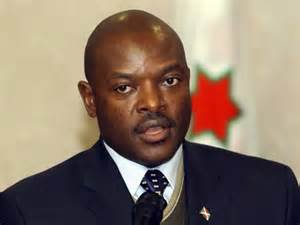 Lieutenant Kelly Nkurunziza was awarded the national medal by his father’s successor during the Independence Day celebrations on July 1.

The younger Nkurunziza was commissioned as army officer in March by his father, who suddenly died in June, to the rank of second-lieutenant after he finished commando training in the country.

He was subsequently promoted to the rank of lieutenant a day before the July 1 celebrations.

“Because of his discipline and heroism, everyone who saw him says ‘this young man will become something’,” Mr Ndayishimiye, who was a close ally of the late president, said.

The president also rewarded two soldiers including one who was recently killed as he “bravely fought the neighbour of the north” in Lake Rweru, near the border with Rwanda.

In May, Burundi and Rwanda soldiers fought at that border lake, in one of the recent military incidents that reflect the five-year tensions between the two neighbours.

Mr Kikwete is among top officials who were present at the burial of Pierre Nkurunziza and the inauguration of Mr Ndayishimiye last month.