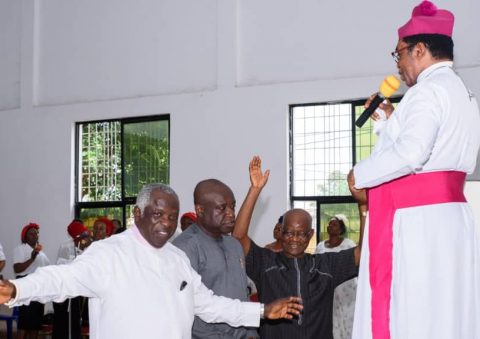 (AFRICAN EXAMINER) – As the recent introduction of charges on withdrawal and deposits above 500,000 (five hundred thousand naira) by commercial banks as directed by the Central bank of Nigeria(CBN) continues to generate reactions in the country, the Archbishop of Enugu Ecclesiastical province of the Anglican church, Most Rev. Emmanuel Chukwuma, has condemned the decision in its entirely, describing it as anti human policy.

He said such a policy if allowed, would aggravate the pains and sufferings being faced by Nigerians, urging the nation’s National Assembly (NASS) to as a matter of urgency rise up and say no to it in the interest of the citizens .

The outspoken Cleric, stated this while speaking with newsmen  in Enugu shortly after officiating a religious monthly programme, christened “Breakfast with the Lord” organized in honour of  former chairman of the Enugu sports club, Chief Ben Etiaba, to mark his 56th birthday alongside two other members of the club born in the month of September.

Archbishop Chukwuma, who equally asked the Nigeria’s apex bank CBN, to rescind the decision noted that  “President Buhari had during his electioneering campaign promised that he would not make life difficult for people, but he is now putting another burden on the citizens.

“People are now finding it difficult making money, Nigerians are really suffering. This policy is very untimely and unacceptable, and I think the NASS should insist that the CBN governor should suspend the policy.

“This policy is going to bring more hardship upon the people and we cannot accept that, so, I feel the Federal Government should review it, as this policy will discourage people from depositing money in the bank, it will make people stock money in soakaway or in private volts, this is not encouraging, it will affect the economy of Nigeria.

According to the clergyman, “we don’t need more hardship on people, the policy is absolutely rejected, because it is highly anti human.

Chukwuma, who delivered a sermon at the event, with the theme: “Within God Nothing is impossible” noted that introduction of anti human programme and  policies have over the years done serious harm to Nigerians.

He posited that the Nigerian nation has been facing serious economic and political woes over the years due to the fact that the country had always been governed by unrighteous and wicked political leaders who do not have interest of the masses at heart.

In a brief chat with journalists, the elated celebrant, Chief Etiaba, who is the eldest son to ex- female governor of Anambra state, South- East Nigeria,  Mrs. Virgy Etiaba, had expressed appreciation to God for making it possible for him to attain the new age.

Chief Etiaba  said: “I feel glad today, and I want to say thank you father for adding one year to my life with good health” stressing that he is also happy that God has been using him to render selfless services to the society, especially mentoring of young ones whom according to him, remains future leaders of tomorrow.

He equally thanked the Enugu sports club for affording him the platform to showcase the stuff he is made of, stating  that in his little way he has contributed to the development and empowerment of some young persons.

The ex- Enugu sports club boss, averred that he has every reason to appreciate God for his love and benevolences to him and family, saying  am indeed, grateful to God Almighty for his love towards me and family.

Our correspondent who was at the event reports that the ceremony was attended by dignitaries from far and near, including mother of the celebrant, Mrs. Etiaba.