Customs Impound Goods Worth Of N291.7m In South -East 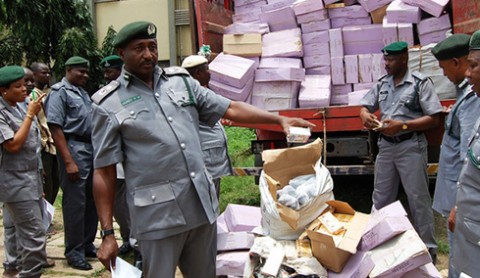 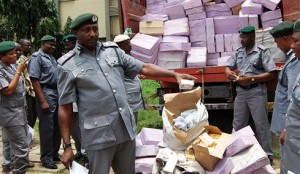 According to the para- military organisation, the items which were impounded last month by its men, includes 17 vehicles on the ever-busy Benin, Agbor, Asaba, Onitsha axis, as well as 6,868 bags of 50kg rice confiscated on the Owerri, Aba, Eleme, Port Harcourt axis.

Others are 180 bales of textile materials also on the Eleme and Agbor axis in addition to 198 pieces of imported used tyres valued about N4.5 million.

Disclosing this to newsmen Monday in Owerri, Mr. Dimka, the Zone C  Customs Area Controller hinted that five suspects have been arrested in connection with the smuggling adding that they are now helping the unit in its further investigation.

The controller, who pegged the under payment recovered at N5,977,588.00, stated that the recent upsurge in smuggling of vehicles into the country is to avert payment of current duty rate.

Such action he said, is criminally designed to sabotage and to frustrate the genuine efforts of the Federal Government in strengthening the automobile industries.

The zonal comptroller, who spoke through the Public Relations Officer of FOU Zone ‘C’, Ifeoma Onuigbo, recalled the era where imported frozen poultry products were being smuggled into the zone, assuring that it will soon be a thing of the past.

Rice, before now according to Dimka,  was one item that is  being smuggled into the country seriously. However, he noted that smugglers are now going into automobile because NCS has reduced it to the barest minimum.

“The smugglers have decided to go into full scale smuggling of automobiles to circumvent the intention of the government in strengthening the indigenous automobile industries.

Dimka added that the feat being recorded by the FOU Zone ‘C’ in the discharge of its statutory duties is partly due to the increasing morale of officers of the unit, following the engagement of experts by the Comptroller General of Customs (CGC),  Alhaji Abdullahi Inde Dikko.

The construction of an ongoing befitting office complex and modern radio communication gadgets and additional arms and ammunitions had equally assisted the zone a great deal; just as he warned smugglers to desist from the unholy business.